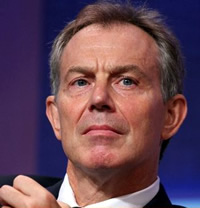 Tony Blair, in a series of press appearances this morning, called for an elected EU president, for the West to find a wider strategic response to the Arab Spring and gave strong support for the military engagement in Libya.

The former prime minister said that it would have been inconceivable to allow Muammar Gaddafi to stay in power and that, in the wake of the Arab Spring, the West should issue a warnings to all autocratic leaders in the region to “change or be changed”.

In defence of his previous attempts at co-operation with Gaddafi he insisted:

“I think when he gave up his nuclear and his chemical weapons programmes, this was a huge thing for us. He stopped sponsoring terrorism, he started actually co-operating. It was a big change and, frankly, had the internal policies been the same, had he gone through the same process of change that his foreign policy went through, it would have been beneficial for him.”

In comparison with Syria, Blair said it was right to ask questions of the international community over its different approach but put it down to the wider consequences for the region of bringing down President Bashar al-Assad’s regime, a lack of support for action and the perception that Assad was a potential reformer.

“It’s not always easy to make absolutely logical distinctions. I mean, why are we treating Syria differently than Libya? The answer is because there isn’t the same consent to deal with the Assad regime in Syria.

“There is some hope still, I think diminishing, that he could offer a reform programme of change in Syria, and most of all, and this is what’s difficult when you’re sitting in a position of leadership – if you remove that regime, what follows? What do you get? Do you get an orderly transition to democracy or do you get chaos, instability, with massive ramifications, in this case, for Israel, Palestine, for the peace process there.”

Blair was speaking as it emerged there was evidence Gaddafi had directly “ordered mass rapes and gave sex drugs to troops to encourage them to attack women” according to the chief prosecutor, Luis Moreno-Ocampo, of the International Criminal Court.

Mr Moreno-Ocampo, speaking at a New York news conference, said that until recently, there had been a question over Col Gaddafi’s personal involvement in this war crime. The chief prosecutor said:

“It never was the pattern he used to control the population,” he said.

“The rape is a new aspect of the repression.

“But now we are confirming there was a policy to rape in Libya.

The prosecutor said they could not be sure how widespread these atrocities were but he had received information there were several hundred victims in some areas.

Meanwhile the ongoing farce of Formula One attempting to hold a Grand Prix in Bahrain, despite its government’s use of extreme violence to suppress democratic and peaceful protests, has reached the European parliament.

As things stand, the grand prix that was called off, then reinstated, has now been called off again following a letter sent by the driving teams to the FIA, the sports governing body, on Tuesday, expressing their objections to Bahrain being put back on the calendar. Although their concerns seem to be more practical that humanitarian.

“I rise to ask the President to write to the Formula One Teams Association, including Lotus in my own constituency, who said yesterday that logistical problems prevent them supporting a rearranged Grand Prix in Bahrain, to remind them that there is a fine tradition of sportspeople withdrawing on human rights grounds from Muhammad Ali over Vietnam, to cricketers refusing to go to apartheid South Africa or athletes to the Moscow Olympics.

“And that the President expresses the support of this European Parliament for any team which chooses to withdraw, given the need to send a clear message for change and that this year we don’t want the bloodied name of Bahrain to stand alongside the proud European names of Nurburgring, Monaco, Monza or Silverstone.”

The EU parliament has of yet made no official statement of consensus on the issue. A spokesperson for Jerzy Buzek, the President of the European parliament, said that:

A source inside the EU parliament told Left Foot Forward the idea raised by Mr Howitt has received a lot of support and is looked on favourably in the EU.

Mr Howitt’s strong commitment to internationalism and actions of international solidarity in the fight against oppression is part of a proud and noble tradition of the left, whatever mistakes may have been made over military interventions in the past, this principle must not be forgotten.