The legacy of Margaret Thatcher was fewer workplace rights, longer working hours and less productivity in the UK.

Yesterday’s Daily Mail celebrated the fruits of Thatcherism, with a headline that trumpeted:

Thatcher’s legacy: UK ‘is the only nation working harder than in the 1980s’

“Britain is the only country whose people work harder than they did in the 1980s, an international study has found. Margaret Thatcher’s workplace revolution has seen Britons working more hours per week than when she was in Number Ten.

“The former Tory prime minister’s success at cracking down on union restrictive practices and freeing the country’s entrepreneurial spirit means we work much harder than we used to. Meanwhile, across Europe, people now work fewer hours than they did in the 1980s.”

It quotes OECD data that shows that while working times have been falling in recent years across developed countries, they have been rising in the UK. In fact, as this 2009 EU data shows, British employees work longer hours than their counterparts in almost any other country (source : Eurofound):

All things being equal, this would make us (with Romania and Malta), the richest people in Europe. Unfortunately, our productivity lags far behind our main northern and western European neighours, according to this OECD data: 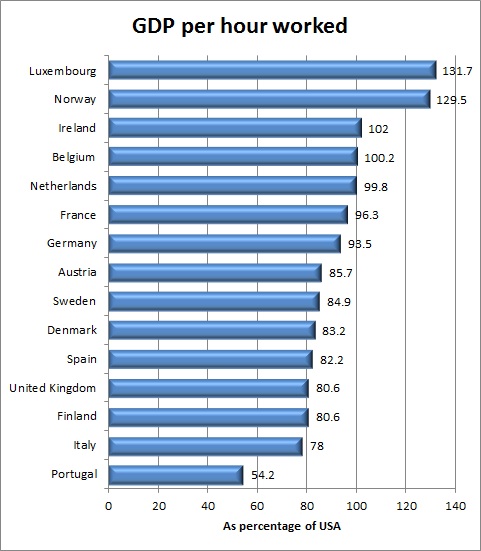 When did the UK fall behind? Well a big chunk of the ‘productivity gap’ fell into place in the 1980s, under Thatcher. Lets compare changes in productivity since 1979 between blessed economically liberated Britain and that union-infested tyranny of unreconstructed statism, France ( Again, sourced from the OECD): 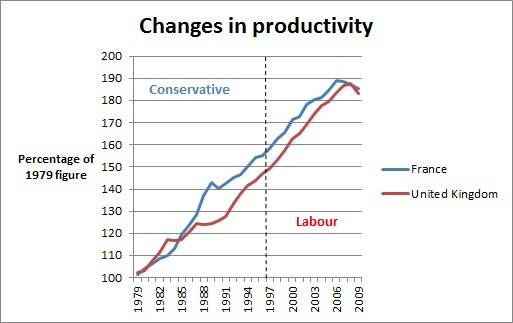 As you can see, France sped ahead with productivity gains in the late 80s, just as Thatcher’s reforms kicked in. After the UK took a productivity hit in the mid-80s, the gap stabalised and finally closed under Labour. While Thatcherite reforms may not have been responsible for the loss of relative UK productivity, lack of them did not appear to hold back France. In fact, unsuprisingly, shorter working hours can be a spur to productivity. As an ETUC paper puts it::

“Protecting workers from excessive long working hours can be a driver for productivity. It prevents unproductive employers being ‘bailed out’ at the expense of workers’ time, instead forcing them to invest in a more productive organisation of the work place.”

So there you are – the Thatcher revolution: Longer hours, lower productivity: Something  of which only the Daily Mail could be proud.