Sue Marsh reports on the largest march of sick and disabled people in UK history in reaction to the savage, barbaric, inhuman government cuts to vital support. 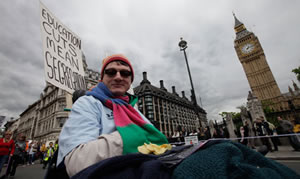 On Wednesday, at least 5000 people in the largest ever UK protest of sick and disabled persons, took to the streets of London. It was supported by leading charities – Mind, Scope, Parkinson’s UK, RNIB, Mencap, Arthritis Care and many, many others. It was also supported by social media groups, campaign groups and by The Guardian and The Mirror. It was a peaceful, successful protest, but that seemed merely to encourage much of the UK media to ignore it.

Did you know, for instance, that protesters carried a vote of no confidence against the minister for Disabilities, Maria Miller? I imagine you didn’t because no-one reported it.

When the Royal College of Nursing (RCN) and the British Medical Association (BMA) take such action, it makes front page news, but when the sick or disabled do so, it goes unreported.

Did you know that Liam Byrne, shadow minister for Work and Pensions, made a well received speech in a tone that seemed to break away from Labour’s previous line on welfare reform? Did you know that he urged the Conservatives to “force the unemployed into work, not force disabled people into poverty”? I imagine you didn’t because no one ran the speech either live or later on in the day.

Did you know that when the BBC did carry the news, they carried an interview with Miller who claimed: “more people claim DLA for alcohol or drug abuse than for being blind”? Did you know that is simply not true? I imagine you didn’t, because the interviewer didn’t challenge her on it. Nor did any so-called investigative journalist spend a few minutes checking her claim for later bulletins.

The images of people in wheelchairs were followed by Miller trying to distinguish between the “deserving” and “undeserving sick” in a way that ignores all scientific evidence and aims to cause division.

In perhaps the worst ambush of the day, we were asked to take part in a Radio 4 “You and Yours” debate that simply felt like a political broadcast for the coalition, in which callers suggested sick or disabled people had no right to go to a pub, or meet friends for coffee or own a car. Mark Littlewood, director of the Institute for Economic Affairs (IEA) was on the show as an “expert” who clearly knew nothing at all of the issues facing sick and disabled people.

He claimed it was our “responsibility” to overcome our conditions and take out payment protection insurance (PPI). These “solutions” totally missed the point that many people disabled from birth would never qualify for PPI and that many conditions will never be overcome, they will only get worse.

This really must stop. While there is, in fact, broad support for some form of welfare reform amongst sick and disabled people, the message that some of the measures being introduced will cause serious suffering amongst this most vulnerable group of all must be addressed and reported on. We are constantly pointing out that people will lose the means of supporting themselves, lose independence and dignity and in some cases lose their lives.

A blanket and lazy acceptance of the government position is ensuring that these measures may well pass into law without undergoing the scrutiny they should.

For how much longer will people stand up to save their trees and their libraries and their allotments, but turn a blind eye to this terrifying attack on profoundly sick and disabled people? If we were cute little puppies, millions would spring to our defence. It is a mark of our society how we deal with more uncomfortable or less glamorous causes. At the moment, I can only conclude that we are failing miserably.

For those who would like to learn more about the protest and why it was necessary, Scope have put together this video of the day; for now, it seems that we will simply have to carry on speaking up for ourselves.