Liam Fox confirmed that Trident subs would cost around double the previously stated price, amidst division within the coalition over the issue. 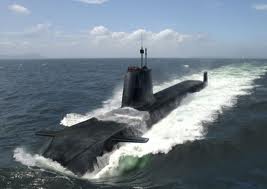 Yesterday’s announcements on Trident’s replacement have exposed ever greater layers of conflict and contradiction at the top of the coalition government. Liam Fox confirmed that the subs would cost around double the previously stated price (pdf) – now up to £25 billion (pdf).

He also authorised billions of pounds of spending prior to the final decision being made in 2016. In his view, quite clearly, new submarines will go ahead and everything nuclear will stay the same. Yet simultaneously, he announced that there would be a study, led by Liberal Democrat Defence minister Nick Harvey, into alternatives to the Trident submarine-based system.

Of course, Fox was reported as rubbishing the study as a“joke”, indicating that he knew the outcome before it has even started. But he is afterall the champion of the Tory right, and it is clearly infuriating for him to have to make concessions to the Lib Dems. Indeed, other gung-ho pro-nuclearites were verging on the apoplectic.

No matter how irritated one might be about Lib Dem u-turns, they do seem to be hanging in there on the Trident question. It would be easy to dismiss this as posturing to try and salvage some of the radical edge they have otherwise lost, but I suspect it is rather more complex than that. Although Fox has announced the intended purchase of so-called ‘long-lead items’ for the new subs, the reality is that Trident’s replacement is not nailed down. The final purchase and manufacture decision point is not taking place until 2016.

There is a study into alternatives which many heavy weight politicians from all parties will support. Yesterday’s events, for me, only confirmed that it is not only the Lib Dems in the coalition government who are unconvinced about replacing Trident, otherwise they would not be getting as far as they are with it.

There must be a question mark hanging over it at some pretty high levels. That was abundantly clear from reading the new National Security Strategy issued last autumn.

Tier one threats were cyber warfare, weather incidents and pandemics; state on state nuclear attack was reduced to tier two. Now we need enough forward-looking politicians with the determination to abandon Cold War dogma and irrelevant status arguments and spend the money on something more useful.