A new poll shows the general public are increasingly sceptical about the power of both markets and the state to deliver on their concerns, reports Will Straw. 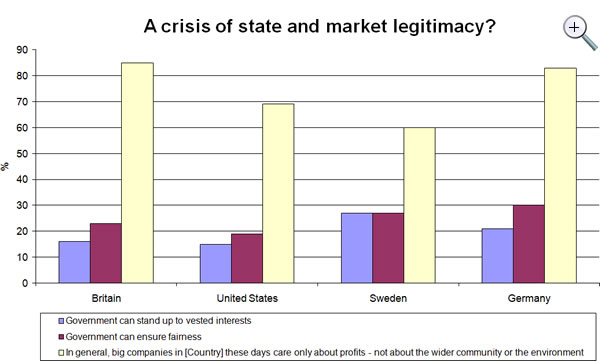 The general public are increasingly sceptical about the power of both markets and the state to deliver on their concerns according to new polling released today by Policy Network. The findings appear to complement the in vogue ‘Blue Labour’ story as well as analysis by James Purnell.

– 85% agree with the statement that “in general, big companies in the UK these days care only about profits – not about the wider community or the environment” compared to only 69% of Americans and 60% of Swedes;

– 64% believe that the market economy is dominated by large corporations which squeeze out small firms compared to 53% of Americans and 46% of Swedes;

– Only 23% believe that government can ensure fairness by taking action to change society for the better compared to 27% in Sweden and 30% in Germany;

In recent weeks, Maurice Glasman – the key proponent of the Blue Labour philosophy – has argued:

“Both Blair and Brown were recklessly naïve about finance capital and the City of London and relentlessly managerial in their methods. Blair developed a political alchemy that Brown failed to recreate, and it was between tradition and modernity. The problem was that his conception of tradition was superficial and his concept of modernisation verging on the demented: a conception of globalisation understood entirely on the terms set by finance capital…

“The withdrawal by New Labour from the economy led to a manic embrace of the state. New Labour’s public sector reforms were almost Maoist in their conception of year zero managerial restructuring.”

While last year, James Purnell used a speech to the London School of Economics to argue:

The Policy Network poll also includes warnings for Labour, finding 39% believe that when the party is in government it taxes too much with too little public benefit – although on this measure the US Democrats (46%) and Germany SPD (48%) fare worse.

Olaf Cramme and Patrick Diamond of Policy Network focus on this finding in their op ed for today’s Guardian:

“Majorities in all four countries believe that centre-left governments tax too much with too little public benefit. This feeling is strongest among the groups the left has to win back. Yet there is support for increased taxation if it is guaranteed to improve benefits and services.

“Job security remains the absolute priority for voters. There is also a strong attachment to the pillars of the postwar welfare state, including pension provision, healthcare and – to a lesser extent – unemployment benefits.”

The findings from the poll will be discussed at a conference in Oslo this week which Ed Miliband is attending alongside Spanish and Greek premiers, José Luis Zapatero and George Papandreou, as well as centre-left leaders from Ireland, Holland, Norway, Sweden, and Denmark and 250 policy makers.