Jon Worth reports from Brussels on the increasing precariousness of Baroness Catherine Ashton's position as European Union foreign affairs chief. 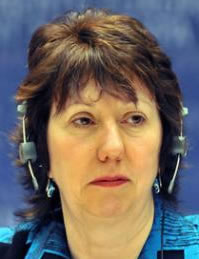 There are two main motivations for national leaders when nominating candidates for high positions in international organisations. Either send away a politician who could be a domestic opponent – for example Nicolas Sarkozy nominating Dominique Strauss-Kahn for the IMF – or choose someone with a low enough profile not to cause problems back home.

The latter was the case in autumn 2009 when, post ratification of the Lisbon Treaty, the European Union needed a High Representative of the Union for Foreign Affairs and Security Policy (aka the EU’s foreign minister).

David Miliband had chosen to focus on UK national politics, Peter Mandelson was judged unacceptable to other EU Member States, and so the job fell to Catherine Ashton, previously European Commissioner for Trade.

A surprise nomination even for the trade job, her nomination for the High Representative position raised a few eyebrows in Brussels, but the logic fitted – the other two top jobs (President of the Commission, President of the European Council) had gone to male politicians of the centre right, and Ashton is female and from the left.

Since then things have gone from bad to worse for Ashton.

She was criticised for not going to Haiti and for not being decisive enough over uprisings in North Africa, with Britain, France and Germany releasing a statement on Egypt before any word from Ashton. David Miliband and Carl Bildt felt the need to pen a letter trying to get Member States to back her, Germany’s foreign minister has tried to defend her while the Belgian foreign minister has attacked her, and in the meantime turf wars rage over the establishment of the European External Action Service (EEAS).

It is an open secret in Brussels that it takes weeks for basic administrative decisions to be taken at the top of the EEAS. Meanwhile the change of government last year in the UK further isolated Ashton, a Labour politician with a Conservative counterpart – William Hague – in King Charles Street.

I first queried the sustainability of Ashton’s continuation in the post in January this year in light of her poor response to developments in Egypt, and more academic analysis has followed. This discontent has reached a new height this week with German Green MEP Reinhard Bütikofer tweeting that European People’s Party (EPP, centre right) MEPs are plotting to oust her, and openly voicing his own critique of Ashton, and his judgment that she is in “real danger”.

The problem is that Ashton is damned if she stays, but replacing her is probably even more fraught with dangers. Bütikofer and his European Parliament colleagues have very blunt formal powers – to censure the whole European Commission of which Ashton is a member. Some statement from the political groups in the Parliament, indicating a lack of confidence in Ashton, might be a softer way forward, but the Socialists & Democrats (S&D group) might not put their heads above the parapet.

Then for the Commission and the Member States the issue is no less complex – would Ashton be willing to go on her own accord, leaving the UK to nominate someone new? Would the UK manage to maintain the same portfolio, or would there be a push for another Member State to get the Foreign Affairs brief? How about party political balance, with the coalition in the UK the nominator of a successor?

Of course there is a possible way forward – might it be convenient for all concerned to push David Miliband for the role?

3 Responses to “Attacked from all sides, Baroness Ashton’s position is getting perilous”