Keiran Roberts reports on the tragic and terrible history behind the Mau Mau rebellion and why the British government is wrong for not apologising. 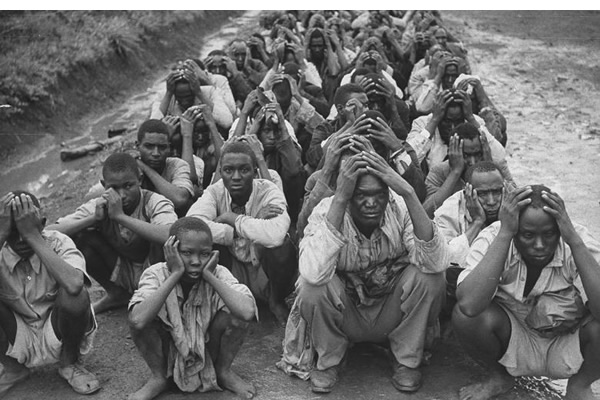 Since 2005, veterans of Kenya’s 1950s Mau Mau rebellion have been raising funds to take legal action against the British government for “crimes against humanity”; yesterday, four Kenyans who claim they underwent torture, sexual abuse and castration while detained under British colonial rule took their claims for compensation to the high court, reports Kieran Roberts

Before going in to the specifics of the case, it would be useful to look briefly at the history of the Mau Mau rebellion.

The rebellion was a military conflict that took place in Kenya between1952 and 1960. Britain had a presence in Kenya since the 19th century and it was a period marked by extreme violence. The attitude of the British is best encapsulated by Francis Hall of the Imperial British East Africa Company who said (pdf), when describing Kenya’s most populous ethnic group:

“There is only one way to improve the Kikuyu [and] that is wipe them out; I should be only too delighted to do so, but we have to depend on them for food supplies.”

As was the modus operandi of colonialism, European settlers obtained for themselves a disproportionate share of land ownership and Kenyans were soon forced to become low-paid wage-labourers, essentially slaves, on white-settler farms.

Understandably, there was a continued resistance to colonialism. The Mau Mau rebellion was borne from people struggling against their loss of land and erosion of their way of life. To depict the Mau Mau as a barbaric group that plunged Kenya in to civil war (as they often are) would be to demonise them. But we shouldn’t romanticise them either. The Mau Mau were guilty of killing Kikuyu themselves but that pales in comparison to the number that were killed by the colonial bureaucracy.

British army officers launched several attacks that included wiping out entire villages. The warfare was also psychological: the Kikuyu who still resisted were subjected to torture. After years of conflict and a death toll of 11,000, elections for Africans to the Legislative Council was granted and took place in 1957, preceding Kenya becoming independent in 1963.

So that’s the backdrop to which these four Kenyans now claim compensation.

The trial went to the high court yesterday and is expected to last several weeks. Over these weeks, a catalogue of barbarity will be revealed as the Foreign and Commonwealth Office (FCO) have unearthed 300 boxes of documents detailing the detention and punishment of suspected rebels. Yesterday, the claimants argued that Whitehall officials knew at the time of the systematic use of violence against thousands of rebels and suspects in detention camps.

Countering this, the FCO, whilst not denying that abuses took place, insists that the UK government bears no residual liability for the claims. It goes further, arguing that any legal responsibility was transferred to the Kenyan republic upon independence in 1963.

There are two fundamental flaws in their argument.

The first is in arguing that legal responsibility transferring to Kenya in 1963 equates to Britain’s legal responsibility in the 50’s ceasing to exist. Kenyans were barred entirely from the political process during these atrocities so to lay blame on them retrospectively is as ignorant as it is shameful.

The second flaw lies in the argument that the government bears no residual liability. Although there is no legal duty on the government to apologise and compensate the four claimants, a legal duty is very different to a moral duty.

The FCO cannot deny that tens of thousands of Kenyans suffered enormously because of the policies of a previous British government but refuses, against Kenyans requests, to apologise for it. Hark back to what William Hague said last year:

“In our first 100 days we have brought the energy of a new government to bear on the promotion of human rights.”

Has the government lost that energy? Does Hague’s department now accept human rights abuses, let alone promote human rights? For justice to be brought about from this trial, the government must do two things: first is to produce the “carefully conceived welfare fund” that the claimants are pressing for, to give them the dignity and respect they deserve in their twilight years; second, and perhaps most importantly, is to issue an apology.

This case applies to far more than the three men and one woman who are pursuing the legal action. It applies to everyone that suffered from the colonising of Kenya. If any morality exists in the FCO, they should echo Kevin Rudd’s apology to the ‘stolen generation’:

“We apologise for the laws and policies of successive governments that have inflicted profound grief, suffering and loss. For the indignity and degradation thus inflicted on a proud people and a proud culture, we say sorry.”

3 Responses to “Why Britain owes Kenya an apology”