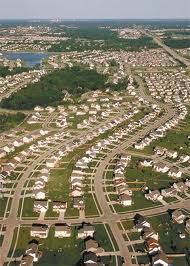 Even before the recession, the frequency with which councils were collecting household waste was diminishing. Today we count ourselves lucky if our local council affords us a weekly bin collection. In less-wealthy Spain, by contrast, refuse continues to be collected on a daily basis. This despite the fact that the Spanish equivalent of council tax is much lower than that paid in the UK.

In Britain, 86 per cent of us live in detached, semi-detached or terraced housing, with our towns and cities divided up into areas for living, areas for working and areas for shopping. The result of this zoned, suburbanised form of urban development is an atomised, sprawling, wasteful urban landscape where social dislocation is rife, the car is often the only practical mode of transport and people do their shopping in bland, faceless retail parks.

In Spain by contrast, 65 per cent of people live in apartment blocks, most of which are ringed on their ground floor with retail units, with some apartments given over to office space. This density-rich, mixed-use approach to urban planning creates vastly more compact, efficient and socio-economically vibrant urban areas.

Compact urbanism eases pressure on the green belt, reduces the cost of transport and public infrastructure and increases the affordability of high-quality, comprehensive public service provision. Efficiency savings from more compact city development have been found to be as high as 20-45% in land resources, 15-20% in the construction of local roads and 7-15% in the provision of water and sewage facilities; as found by Dr. Robert Burchell et al. in 1992.

A notable product of the zoned suburbanisation of the UK is the lack of community cohesion. On the lifeless estates, cul-de-sacs and residential streets that litter our towns and cities, collections of bored-looking young people are automatically identified as sources of intimidation and potential danger.

In compact, mixed-use Spain where the ground floors of residential quarters are taken up by shops, bars and restaurants and open spaces are infused with a busy street-life, any notion of youth intimidation or attack is made obsolete by the fact that ownership of the streets is already in the hands of society, young and old alike.

With more compact, mixed-use urban areas there is less need to travel by car. People walk and cycle more, benefiting their health and their pocket as well as the environment. Social interaction increases. People’s work and leisure lives can take place closer to home and, as a result, a greater sense of trust and responsibility is engendered in society.

A 2009 European Commission survey (pdf) found that, when comparing cities of similar size, Spaniard’s sense of safety in their cities and in their communities to be generally significantly higher than that of their British counterparts, while UK respondents had longer commutes and greater levels of mistrust for their fellow citizens.

What is more, by increasing population density and ringing apartment blocks with retail spaces – thus increasing footfall and the number of lettable retail units available – it becomes more affordable for local people to open up shops and restaurants of their own and easier to compete with larger outfits. This in turn raises standards and lowers prices throughout the retail and service sector.

In large measure as a result of its urban planning policies, Spain has twice the number of retail and restaurant small to medium sized enterprises (SMEs) compared to the UK, despite its smaller population. As a result, a term such as “clone town” has no resonance in Spain, and traditional cuisine has succeeded in restricting McDonald’s et al to the cultural margins.

In short, a more high-density, mixed-use approach to urban development would reduce the strain on the public purse, encourage investment in infrastructure, improve the quality of services, and result in safer, more vibrant towns and cities with healthier, wealthier, better connected citizens, more readily dining out on toad in the hole than a Big Mac™.

I would miss my garden, but not that much.

13 Responses to “UK’s urban sprawl needs to be binned”