Joss Garman with the latest on the nuclear subsidies; more evidence of broken promises on how much we will pay for the industry's mess. 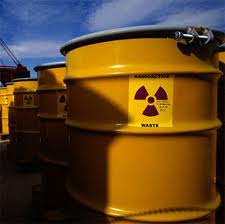 The Mirror reports this morning that taxpayers face a secret £15 billion bill for new nuclear power stations despite assurances from Nick Clegg earlier this week that the government would not break their coalition agreement promise not to provide handouts to the nuclear industry.

Ian Jackson – a former adviser to the government on nuclear power who has worked in the nuclear sector for 20 years – has prepared a report for Greenpeace on the planned hidden subsidies the government have lined up for new nuclear stations.

These are financial benefits in addition to the windfalls – described in my last blog post – that the nuclear industry can also expect from the introduction of the carbon floor price. Jackson’s report details how the hidden handouts centre on something called the “waste transfer price”.

Put simply, because nuclear waste lasts for many thousands of years, the government inevitably has to take over the management of it as the companies most likely won’t be around. The government proposes that the nuclear generators pay the government to take the waste off their hands.

The price gets fixed in advance so that builders and operators know what they are dealing with; if they don’t the unknown nature of the costs would worry and deter investors. Once the waste has been handed over to the government, cost over-runs fall onto the taxpayer.

So the question arises as what this “waste transfer price” should be. Of course, if the price is too low the taxpayer will be picking up the tab for cleaning up the nuclear industry’s mess.

The government have published their proposals on how to fix the price and it’s this that Ian Jackson looked at for Greenpeace.

There are two elements to how that waste transfer price is made up:

1. Variable unit price – this is the price the government charges for dealing with each tonne of uranium in the waste. This is because each tonne of uranium waste will need careful treating and repackaging into a form that (they hope) means it will remain contained for hundreds of thousands of years. And the more hot uranium waste they have to deal with the more expensive it gets.

The government estimate for this is £1005 million for each reactor – this is the amount that government would receive from EdF (and others if they build reactors). However Ian Jackson proposes that a more realistic estimate, given the challenges of nuclear waste management, is £1450m, so a subsidy of £445m per reactor, or £4.45bn if there are 10 reactors.

2. Maximum price cap – The government will set a cap on the total amount that a utility will pay, again to give the nuclear power industry certainty over their costs. That cap will need to be set reasonably soon. According to their consultation, the government’s estimate for this is £1656m (£1.66bn) for each reactor.

Ian Jackson estimates that, given the historical record of how fast nuclear waste management costs are rising in UK and US (much greater than inflation rate), that the cap could be too low. £2783m (£2.78bn) per reactor is his estimate, making the subsidy from this element of the proposals £1127m per reactor. Or £11.27bn for 10 reactors.

Crudely put, the energy department is fixing the price for nuclear waste so that taxpayers absorb the final-end risk so that the nuclear industry doesn’t have to.