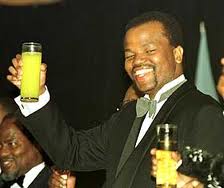 Mark Beacon is campaigns manager for Action for Southern Africa, the successor organisation to the Anti Apartheid Movement

Yesterday evening more than 60 protesters gathered outside London’s Dorchester Hotel, anticipating the arrival of one of the most controversial guests at the royal wedding – Africa’s only absolute monarch, king Mswati III of Swaziland.

Swaziland has endured the restrictions of a state of emergency since 1973. It has the highest rate of HIV in the world, one of the lowest life expectancies and almost two thirds of the population live in absolute poverty, whilst the king and his friends live in luxury. Political parties are banned, trade unions are massively restricted and the country scores lower than Zimbabwe for its political rights.

As the protesters assembled yesterday evening, news emerged that the king and his entourage had moved to another equally luxurious hotel, in a bid to avoid the critical voices. However, in dealing with protesters in Swaziland, the government has gained a reputation for using more aggressive tactics, including force and repressive legislation to crush dissent.

On April 12-13 hundreds of people in the southern African state were arrested for attempting to protest for democracy, rights and against massive cuts to services. Ahead of the demonstrations the kingdom’s security forces rounded up and detained trade union and pro-democracy leaders. Trade union offices were surrounded by police to prevent anyone from leaving and those who managed to protest were met with batons and tear gas, arrested and then dropped off in forests, left to find their own way home.

Whilst King Mswati and his entourage of 50 stay in one of London’s most luxurious hotels, the people of Swaziland are being plunged deeper into poverty. Financial mismanagement, the global recession and recent reforms to the Southern African Customs Union have left a massive black hole in the Swazi economy, which until recently has been ignored. Unfortunately the government has responded with massive cuts to public services and over 7,000 redundancies, in a country where 40 per cent are already unemployed.

In the last few days power companies have turned off the lights in government departments for failing to pay their bills, while the government continues to invest huge sums in the already massive security sector, vanity projects including a new airport and the king’s personal budget, which has increased by over 60 per cent in the last two years.

It is astounding that in a climate of increasing repression and human rights violations that king Mswati should be invited to the royal wedding. ACTSA is calling for the invitation to be reconsidered and preferably revoked. At the very least the British government should speak out about the worsening situation in Swaziland and express concern to the highest levels of its government. ACTSA is asking its supporters to email Foreign secretary William Hague and echo these concerns.