David Willetts's soundbite that 'feminism trumped egalitarianism' is refuted by Declan Gaffney, with analysis showing how both work together for social mobility. 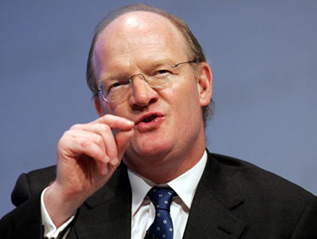 However, this is how the more sympathetic Daily Telegraph reported Willetts’s argument:

Asked what was to blame for the lack of social mobility, Mr Willetts said:

“The feminist revolution in its first round effects was probably the key factor. Feminism trumped egalitarianism. It is not that I am against feminism, it’s just that is probably the single biggest factor…

“One of the things that happened over that period was that the entirely admirable transformation of opportunities for women meant that with a lot of the expansion of education in the 1960s, 70s and 80s, the first beneficiaries were the daughters of middle-class families who had previously been excluded from educational opportunities…

“And if you put that with what is called ‘assortative mating’ – that well-educated women marry well-educated men – this transformation of opportunities for women ended up magnifying social divides.

“It is delicate territory because it is not a bad thing that women had these opportunities, but it widened the gap in household incomes because you suddenly had two-earner couples, both of whom were well-educated, compared with often workless households where nobody was educated.”

While the ‘feminism trumped egalitarianism’ soundbite is provocative, there is nothing controversial in arguing that changes in mothers’ employment have had a significant impact on income distribution. Dual-earner couples have very low risks of income poverty compared to other household types, and because couples account for a very large share of the working age population, their incomes also have a big influence on the median income against which poverty is measured.

This can mean that an increase in the employment of mothers in couples can contribute to increases in inequality and even in poverty, independently of other trends in employment and earnings, as the income of other households falls further away from the average.

In fact, international comparisons indicate that despite marked differences in women’s employment by social class in most countries, the equalising effect dominates, as the chart below adapted from OECD data showing the relationship between child poverty and maternal employment illustrates: 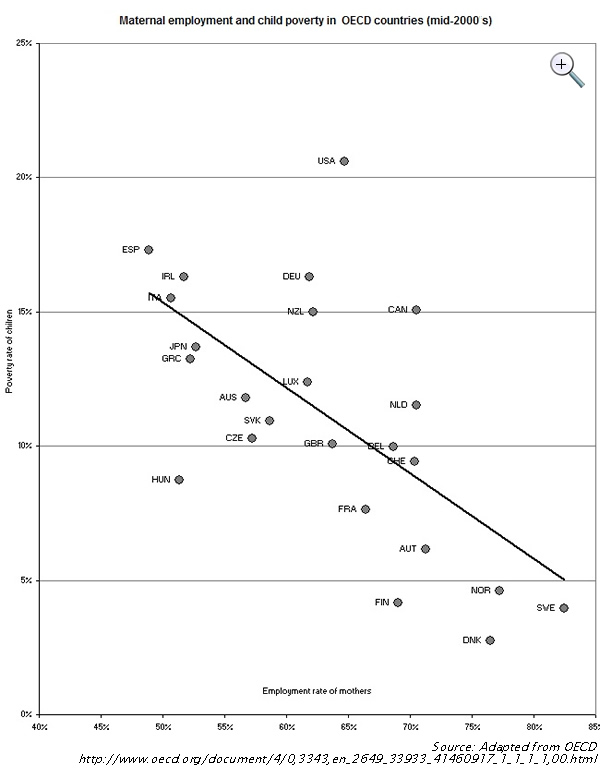 At the same time it is clear that the effect of mothers’ employment on poverty and inequality varies from country to country. Social class differences in employment are the main factor in explaining this. The UK has relatively low employment for women with lower qualifications, only 55% compared for example to 67% in Denmark and 76% in France (data from the Luxembourg Income Study here: http://www.lisproject.org/key-figures/key-figures.htm). Even more importantly when it comes to the effect of women’s employment on inequality, the employment gap between women with the lowest qualifications and those with mid-level qualifications is very high in the UK at 20 percentage points, exceeded only by the United States, Ireland and Hungary. (See the very full account by Susan Harkness here http://www.lisproject.org/conference/papers/harkness.pdf)

So the problem in the UK is not that mothers’ employment increased over the last thirty years, but that it did not increase evenly across social classes. While this is also the case for other OECD countries, the UK showed a more marked pattern than most.

This aspect is referred to in Willetts’s comments, but in terms of a potentially misleading contrast between ‘two-earner couples, both of whom were well-educated, compared with often workless households where nobody was educated’ – ignoring both the large number of working poor couple families, who account for 46% of UK child poverty, and the 54% of lone parents who are in employment, who also face high poverty risks.

The fissure between middle and low income groups in the UK can not be equated with that between the employed and the workless: it also runs between different groups of working households, reflecting the social class gradient in household-level employment.

Feminism didn’t trump egalitarianism: the deteriorating position of lower income groups in the UK during the 1980s and early 1990s trumped both of them. Countries with a strongly egalitarian and feminist policy focus promoted increases in women’s employment without suffering the UK’s extraordinary rise in inequality at the lower end of the income distribution, which Labour with its strong focus on family employment only partly reversed.

Following Willetts’s logic, rather than his selective and one-sided comments, we need more feminism, not less.

• Update: For the effect on the relationship between mother’s employment rate and poverty once outliers such as Scandinavian countries and the USA are taken out, see this note.