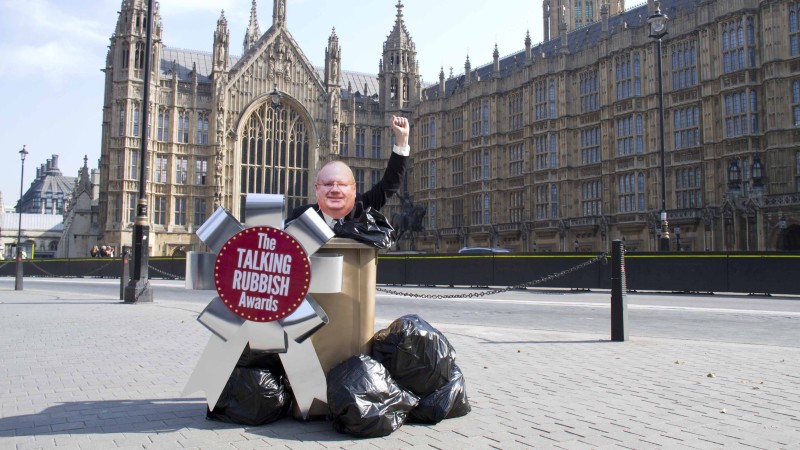 Eric Pickles, Secretary of State for Communities and Local Government, has finally won the recognition he deserves, by swooping the first ever “Talking Rubbish” awards.

Pickles was overwhelmingly voted the winner, despite strong competition from fellow government ministers, for his much hyped claims that people live in fear of the ‘bin police’.

Using language more descriptive of Stalinist Russia than waste collection services in modern Britain, Mr Pickles made himself the clear favourite by saying:

“The iron fist of the municipal state has come down on people for the most minor of bin breaches.”

In fact recycling is popular; WRAP – the taxpayer funded, and impartial, government waste advisor – found that more than 80% of the public are satisfied with their waste and recycling collection, and a clear majority can be described as committed recyclers.

The impression given by Mr Pickles – among other commentators – that people are oppressed by the “tyranny of recycling”, was always going to be hard to beat. Though in fairness he seems to have stopped short of demanding a revolutionary uprising against green bins.

This does not mean that other senior Tories weren’t prepared to give it their best shot. Presumably realising that she could not out-do Pickles in the pure nonsense stakes, Caroline Spelman, the environment secretary, added multiple levels of denial. She said on the subject of scrapping bin taxes:

“Rather than punishing struggling families with new taxes and fines, we will be supporting innovative schemes.”

Friends of the Earth (FoE) point out:

“The truth is the coalition government likes to brag about scrapping bin taxes. But in reality we still pay tax for our rubbish to be collected through council tax.Variable charges for waste collection according to how much waste is produced have been shown to be capable of increasing recycling up to 40 per cent, as well as reduce overall arisings.

“This system works well in many other European countries (for more information, see the link on the first page of this FoE document). In the long term it would mean lower council tax for everyone. Only the super-wasteful would carry the burden for what they chuck away – not struggling families.”

So not only rubbish but rubbish about her her own government’s policies. Surprisingly Spelman came in only third with just 99 online votes but it was a valiant effort nonetheless. Friends of the Earth say they set up the contest “in response to the coalition’s record of talking trash whilst failing to set out a sensible plan for dealing with England’s waste”.

Julian Kirby, a waste campaigner for Friends of the Earth, said:

“Government ministers have been keen to trash recycling when in reality it’s more popular and successful than ever. Eric Pickles in particular has been at war with councils when he should be supporting them to cut the amount we needlessly throw away.

“David Cameron needs to take control of his hysterical, squabbling ministers and set a goal to halve the nation’s black bag waste by 2020.”

The charity also report that more than 9,000 people have contacted David Cameron to ask his government to talk half as much rubbish, following the charities campaign, and more than 5,000 postcards have been signed. These names were handed in at Parliament following the awards ceremony.

Left Foot Forward would like to point out this is not the first, or the second, or even the third time Mr Pickles’s rhetoric has fallen short of reality – even Tory councilors have been known to complain about him.

• To support Friends of the Earth please click here.