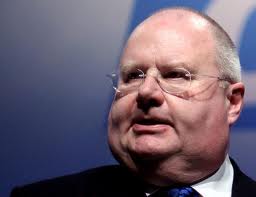 Katie Schmuecker is a senior research fellow at ippr north

“The richest and most affluent areas of middle England already pay the highest council tax.”

But he skimmed over the fact that affluent tax payers in “middle England” are in fact likely to pay less council tax than somebody in a similar property in not such an affluent part of the country – surely the real challenge to fairness.

The problem with the council tax map is that it shows the level of council tax paid per resident. This fails, however, to compare like with like. The council tax system allocates properties into eight council tax bands – A to H. Band A properties are those with the lowest value, and band H the highest value. Band D is used to calculate all the others, so a band A resident pays 6/9 the tax of a band D resident, and a band H resident 18/9 (i.e. twice the rate).

Because different areas have different mixes of housing in different bands, looking at council tax per head does not offer a true comparison. For example, 85 per cent of properties in the North East of England are in bands A-C, compared to 44% in London. It is hardly surprising that Londoners pay more per resident in council tax than North Easterners: they live in houses that are worth much more.

To make a fair comparison we need to look at how much band D residents pay across the country. For example the highest average band D council tax is charged in the North East (£1,512), while the lowest average is found in London (£1,308). The map below shows what a truer comparison looks like, and suddenly the far North of England and parts of the East Midlands look rather more expensive than they did in DCLG’s map: 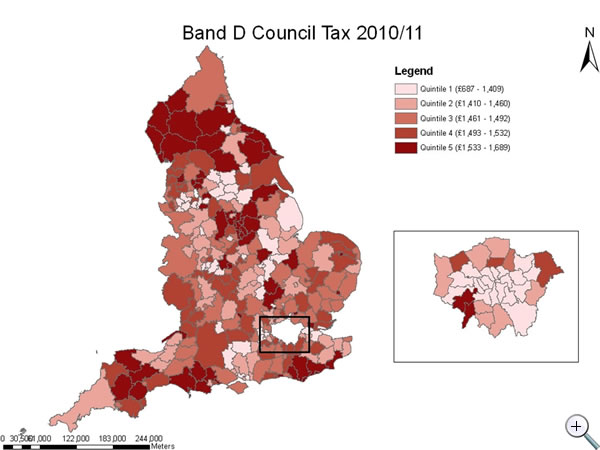 However, there is a more fundamental issue at stake here, that of equity.

That the formula grant system pays out more to some areas than it does to others is obvious. Its purpose is to ensure all areas have enough revenue to deliver services. It is a complex formula that seeks to balance levels of deprivation, with different levels of demand for services, variable costs of delivering services, the capacity of an authority to raise revenue through the council tax, and overall population size.

There is also a damping mechanism that seeks to ensure all authorities receive a minimum funding increase in each settlement.

The government is currently reviewing the way local government is resourced, focusing on options for allowing local authorities to retain more of their business rates and reforming the way the formula grant works. This is to be welcomed. One of the key problems with the formula grant is its complexity. It is so opaque that it is fast becoming another Schleswig-Holstein Question: so difficult that only three people understand it – one of whom is dead, one has gone mad and the other has forgotten.

The effect of this complexity was amply demonstrated by the debate that followed the publication of the local government finance settlement at the end of last year. The government chose to provide details of changes to local authority “spending power”, a new way of presenting the data that many in local government criticised for obscuring the scale of the cuts they faced.

It is this complexity – rather than a lack of maps – that makes local government funding lack transparency. Publishing data to enable people to hold their council to account is a positive step. But the map published yesterday does not add clarity, it muddies the waters. And why would Mr Pickles and the Department for Communities and Local Government want to do that?!