Dominic Browne rounds up reaction to the launch of the coalition's "listening exercise" on the NHS reforms. 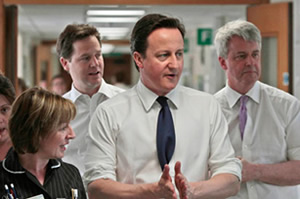 Yesterday saw the launch of the government’s “listening exercise” on NHS reform. As the saying goes, no one ever learnt anything from listening to themselves; so David Cameron, who has stepped in to help sell the reforms, deputy Nick Clegg and health secretary Andrew Lansley visited one of England’s best hospitals to tell around 100 staff why they believe the NHS needs such radical reforms – and then listen of course.

Mr Cameron made the case for reform on the basis of the sheer volume of work the NHS has to do, which will only increase with our aging population, saying:

“The status quo is not an option.”

However, the debate over what reforms will be made and how continues to put the government on the back foot, if not on the ropes.

The reaction from the papers could have been more positive. Most awkwardly of all, The Guardian scooped a leaked memo from NHS chief executive David Nicholson, that:

“…indicated there may be little room for manoeuvre in reworking the health and social care bill.”

“The memo drew a red line beneath the fundamental planks of the bill that are not for changing: GP consortiums, an independent commissioning board to oversee them, every hospital to become a foundation trust, and Healthwatch and primary care trusts to be abolished by 2013.

“The memo said there would be delays in setting up Monitor, a regulatory body for bringing competition in the NHS, to which many object, which will slip to July 2012, and the abolition of strategic health authorities will also be delayed to the same date.”

The Independent seemed to have predicted this line for today with a report headlined:

“Minister: tell us your fears about NHS reforms – but we might not listen”

The main angle in the right wing press was the prime minister’s gracious acceptance that his health minister had made mistakes over the reforms – or words to that effect.

Explaining that he “offered a series of concessions” and “signalled that hospital doctors would get places on the boards of new GP commissioning groups”.

The Telegraph reported the event under the headline:

“Cameron regrets ‘charging ahead’ on NHS reform without support”

It quoted Cameron’s speech at the event in Surrey:

“The NHS is so precious that you don’t charge ahead if you can’t garner professional and public support for what you’re doing.

“We’re taking this time to pause, listen, reflect on and improve our NHS modernisation plans. Where there are good suggestions to improve the legislation, those changes will be made.”

Martin Beckford, writing for the paper, went on to state:

“It was a humiliating moment for the Health Secretary, who had refused to make any significant changes to the legislation in the nine months since his White Paper was published despite serious concerns being raised by professional organisations such as the British Medical Association and the Royal College of Nursing, as well as leading journals such as the BMJ and the Lancet, and senior figures from across the political spectrum including Lord Tebbit, Lord Owen and Baroness Williams.”

The Sun tried to make the best of a bad situation on Cameron’s behalf. Reporting under the headline:

“David Cameron slapped down his health secretary yesterday as he backtracked on the NHS overhaul.”

The Mirror, on the other hand, lead with a somewhat opposite view of Cameron’s seemingly heroic intervention under the headline:

“David Cameron’s desperate bid to save his dreaded NHS reform”

Don Mackay, writing for the paper, described the reforms as “potentially disastrous” and Cameron as using the event to “publicly humiliate Mr Lansley”.

John Healey who has made a fine showing in the Commons on the bill, has been widely quoted as saying:

“If the prime minister is serious about listening rather than PR spin, people will expect root and branch changes to his NHS plans.

“But while they claim to be listening, the Tory-led government is in fact still ploughing on with their NHS reorganisation.”

With the Liberal Democrats still demanding substantial changes, and medical professional bodies looking unlikely to be convinced any time soon, the coalition government have their work cut out for them. It’s hard to make a u-turn at the best of times, harder still when your coalition is pulling in two opposite directions. The question is, having paused to check the map, will they be able to find a way back?