As the world comes to terms with intervention in Libya, and while Yemen and Bahrain once again resort to violence to quell popular uprisings, another Arab state has begun to feel the familiar rumbling of unrest, reports Seph Brown. 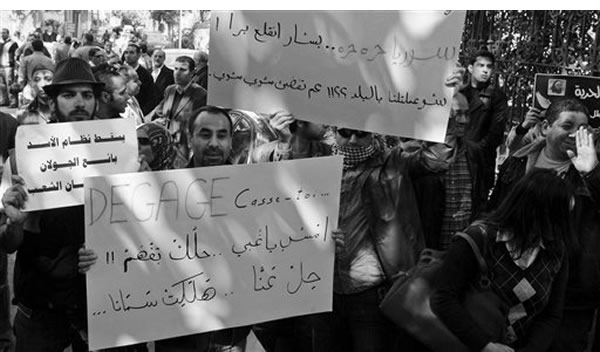 As the world comes to terms with intervention in Libya, and while Yemen and Bahrain once again resort to violence to quell popular uprisings, another Arab state has begun to feel the familiar rumbling of unrest, reports Seph Brown

Sketchy and often unconfirmed reports are developing from Syria – one of the world’s most repressive and deeply corrupt states – that a ‘March15th’ democracy movement may be emerging. The Economist’s February Index of Unrest puts Syria very close to the top, despite few reports of protest or violence in the country at that time.

Israeli Middle East analyst Zvi Bar’el even wrote in Haaretz that Syria was unique since its government has been strengthened by uprisings elsewhere, saying:

“…despite the fact that [Syria’s] economic conditions are similar to those in Egypt or Yemen, Syria is no powder keg about to explode into a popular revolt.”

It is a brave crowd who stand up to President Bashar Al-Assad, who has ruled since 2000, after his father’s three-decade reign. In 1982 Bashar’s father, Hafez, ordered the army to crush an uprising in the city of Hama in western Syria. Much of the city was levelled by the bombardment, with approximately 20,000, mostly civilian, casualties.

However, it seems Syria might yet warrant its high ‘unrest score’; protests in Damascus were broken up on Tuesday, where 35 people were arrested – but Friday has seen protests flare up across the country.

Clashes in the south-western city of Daraa, close to the Jordanian border, have reportedly seen four protesters killed by security forces. Two videos show large crowds in and around Daraa. Other footage has appeared of a large crowd being dispersed by water cannon.

According to journalist Liliane Khalil of Turkish newspaper Sabah, water cannons were also used in the towns of Homs, on Syria’s western border with Lebanon, and Baniyas, on Syria’s north-western coastline. Footage of a rally in Baniyas has also appeared online.

In Damascus many reports claim that after Friday prayers clashes broke out in mosques and streets across the city. A video has emerged of a rally inside the famous Ummayyad Mosque, purportedly showing the security forces breaking up the protest and making arrests.

In the far north-east of Syria protesters march through the city of Hassakeh, where protesters carried placards calling on the Syria President to go, one stating:

“Leave Leave Doctor. We want to live. We don’t want promises and lies.”

State news station, SANA, reported that the protests were overrun by “infiltrators” who committed “acts of sabotage”, including setting fire to shops and cars, prompting security forces to intervene.

Syria has a long history of repression, predated by decades of coups and counter-coups. Hafez Assad fought hard to stabilise the country and distract the population from his autocratic rule by confronting Israel. Despite coming to power on a wave of optimism for reform, his son is unlikely to loosen his grip anytime soon.

13 Responses to “Wave of unrest spreads to Syria”