The United Nations Security Council last night voted to authorise the imposition of a no fly zone and supporting military action in defence of the Libyan people. 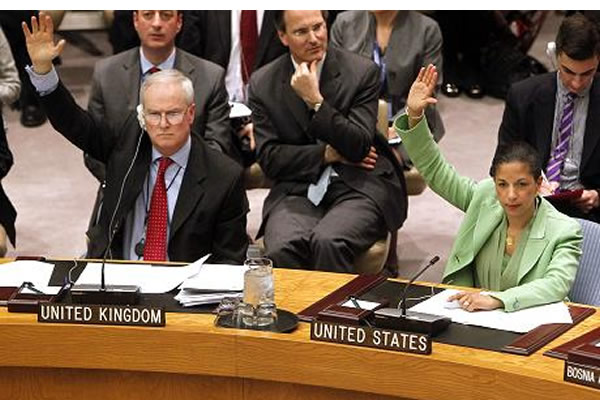 The United Nations Security Council last night voted to authorise the imposition of a no fly zone and supporting military action in defence of the Libyan people. UNSCR 1973 (2011) – citing a “gross and systematic violation of human rights” – imposes a no fly zone, expands the arms embargo and freezes Libyan government assets.

Critically, the resolution was passed under Chapter VII of the UN Charter which enables military action in the name of international peace and security. As such, the resolution is far stronger than many UN critics might have expected.

The resolution acknowledges the vital regional support of the Arab League and states that the United Nations:

“Authorises Member States that have notified the Secretary-General, acting nationally or through regional organizations or arrangements, and acting in cooperation with the Secretary-General, to take all necessary measures, notwithstanding paragraph 9 of resolution 1970 (2011), to protect civilians and civilian populated areas under threat of attack in the Libyan Arab Jamahiriya, including Benghazi, while excluding a foreign occupation force of any form on any part of Libyan territory.”

The passage of the resolution is a major success for US Secretary of State Hillary Clinton who has overcome strong internal opposition within the Obama Administration from outgoing Secretary of Defense Robert Gates.

The resolution is also a vindication of a classic liberal interventionist willingness to trade speed of escalation for scale of escalation – i.e. an acceptance that whilst it may take longer for a humanitarian intervention to be mounted with military backing, when it does occur it is with greater legitimacy and potential force.

This doctrine, practiced in Kosovo, Sierra Leone and East Timor in the pre-Iraq era, will now be put the test in Libya.