There is continued confusion today over where the government, or even the prime minister himself, stands over foreign policy in general and Libya in particular. 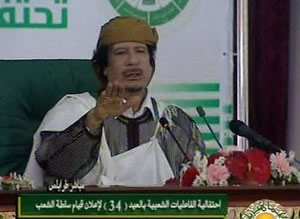 There is continued confusion today over where the government, or even the prime minister himself, stands over foreign policy in general and Libya in particular, with reports this morning of a split in the Cabinet between Michael Gove and William Hague. Today’s Times (£) reports that the education secretary demanded a “tougher line” on dictators at Tuesday’s Cabinet, “setting him on a collision course with William Hague” and even appearing “to irritate the prime minister”.

“The intervention came in a frank Cabinet meeting which, witnesses say, demonstrated clearly how Mr Cameron’s foreign policy, once almost entirely focused on trade, is in flux. [However] Mr Gove, described as the most aggressive advocate for freedom around the Cabinet table, did not go so far as to advocate military intervention to oust Colonel Muammar Gaddafi…

“Mr Gove’s intervention crystallised the difference in the Cabinet between two sharply differing Conservative attitudes. Set against the idealism of the Education Secretary was the caution of the Foreign Secretary, with Mr Hague arguing that “epoch-making” events need a more restrained response. It would be unwise, he is telling colleagues, to attempt to “pick winners” while events unfold. He said that overhasty assumptions that “freedom” and “democracy” will amount to the same thing must be treated with care.

“In a direct rebuff to Mr Gove, Mr Hague is also saying that any perception of British meddling in countries such as Libya and Egypt is likely to be counterproductive and strengthen the hands of Britain’s opponents.”

Mr Hague, when he came to power, had pledged a “break from the interventionist policies” of the Blair era, yet no one yet knows exactly where his boss stands, and what future a purely trade-led foreign policy has, with events of the past few months showing the undesirability of a purely stay-at-home policy.

Shadow defence secretary Jim Murphy, meanwhile, has given a speech this lunchtime on lessons for the future post-Afghanistan; he told RUSI:

“Our aim is not to build Hampshire in Helmand, but it is in part to ensure that Helmand does not come to Hampshire. We must develop domestic security, infrastructure and local self-governance to a point that coalition withdrawal does not precipitate a collapse but rather a continuation of that progress.

“People often identify the danger of failed states, but there is another danger: State of Ambivalence. The principal danger of ambivalence is that in those states where the risk of conflict is highest its drivers would be able to proceed unabated…

“The prosperity, security, liberty and civil liberties of those at home cannot be separated from events beyond our borders. A belief that you have responsibility beyond your borders is not, as some would have it, ideological, but, as we have seen over the last few days, a necessary response to the world in which we live.

“This is a challenge for the Labour Party. Opposition is about proving your preparedness to engage with the issues you would have to in Government if it is to be responsible and ultimately electorally credible…

“The country wants to know what the impact of government cuts will be on our defence capabilities, in particular whether the decade long carrier strike capability gap, cuts to maritime capability and scaling back plans to increase the helicopter fleet limit our ability to respond to crises.

“The explosive events of recent weeks demand wider a reassessment of the assumptions on which defence policy has been based. It would be a sign of a confident government to look again at its strategic defence posture, and in doing so they would regain some lost credibility.”

7 Responses to “Are the cabinet split over Libya?”