Boris Johnson claims that he has "done the impossible" by improving transport in London by "with £7.6 billion of cuts" - a far-fetched claim, explains Shamik Das. 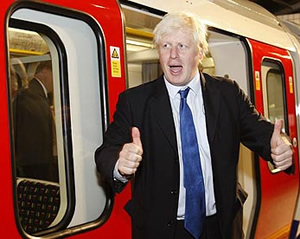 Another day, another work of fiction from the Mayor of London in a right-wing newspaper. Fresh from his Telegraph column yesterday in which he said it was Labour’s plan “to get a load of aggressive crusties and Lefties to attack the Ritz hotel” and storm Fortnum’s, and that Ed Miliband and Ed Balls “will feel quietly satisfied by the disorder”, Boris Johnson claims on the front page of tonight’s Standard that he has “done the impossible” by improving transport “with £7.6 billion of cuts”.

However the Mayor’s business plan (pdf) – which will be put to the TfL board at City Hall tomorrow – reveals more than a third of the government’s £2.2 billion cut to London’s transport network will be passed directly to passengers, who are being hit by annual fare increases of 2 per cent above inflation for the next five years.

It also shows the bus subsidy will be cut by 40 per cent, £300 million will be cut from surface transport and £300 million from station upgrades and other capital programmes, with no reference to the Croydon tram project promised by the Mayor only last week, and no budget or timescale for Boris’s flagship Thames cable car.

“Londoners reading the Standard tonight – maybe on a crowded tube – will realise that you can’t take cuts of almost £8 billion and improve the service. The idea is just ridiculous.

“The reality of the cuts Boris Johnson and the government are inflicting on London transport is that ordinary Londoners are paying more for less. Above inflation fare rises every year, job and service cuts, and fewer tube trains is the truth behind Boris’s spin.”

As Shelly Asquith said yesterday of the Mayor’s wider plans:

“Boris has of course, stayed quiet on these proceedings, while uttering not a word on the prospect of £9,000 fees in conjunction with 80% cuts to London universities’ teaching budgets.”

“…today [the Mayor] announced an additional £2.6billion of cuts in addition to £5billion already planned. He argues that these simply remove waste but, if not, any threat to service levels could end up being counter-productive. As we approach next May’s mayoral election, the stakes could not be higher…”

19 Responses to “Shawcross: Londoners “paying more for less” under Boris”