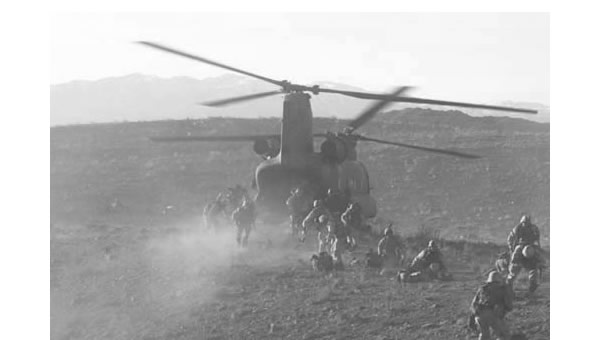 General Petreaus is in Washington to deliver an update on progress in Afghanistan to his political masters. As mentioned previously on Left Foot Forward, he is able to point to real advances in some areas to back up his claims; but reading between the lines, Petreaus already appears to be distancing himself from the population centric Counter-Insurgent (COIN) strategy that the US and ISAF are currently pursuing.

Firstly, as reported in The Times (£) today, Petreaus has said the US is looking to establish joint military bases with Afghan Security Forces beyond the 2014 transition date. Looking to a longer term strategy using Special Forces and adviser teams, this shift by the US, if correctly reported, represents a move away from the nation building COIN strategy to one of a lighter military footprint firmly embedded with ANSF for the long haul.

A strategy like this has been favoured by many serious commentators on Afghanistan like Joe Biden, Rory Stewart, Bing West and Robert Blackwill amongst many others.

Secondly, Petreaus yesterday defined the mission in Afghanistan in its original terms: to prevent the return of Al Qaeda and its safe havens in the country. As there are only an estimated 100 AQ fighters in Afghanistan, re-defining the mission in its pre-nation building (read mission creep) form allows the creation of a narrative of success, a key part of the withdrawal from Iraq.

As the UK’s Foreign Affairs Committee recently reported, this goal of defeating AQ as a force in Afghanistan has largely been completed. In fact, it was completed in 2002.

Thirdly, and related to this, there is growing concern amongst those in the intelligence community about the feasibility of nation building in Afghanistan and the success of the surge to date. Notwithstanding the excellent UK report, heavy hitters from the US intelligence community contradict the military’s ‘cautiously optimistic’ take on things.

According to the LA Times, National Intelligence Director James Clapper told Congress last week that while he did not doubt the tactical gains of the surge, the issue he has is with what happens after that, and:

“…the ability of the Afghan government to pick up their responsibility for governance.”

Director of the Defence Intelligence Agency, General Ronald Burgess, speaking at the same hearing, also questioned the military’s assessment of the insurgency degradation due to the surge, asserting:

“…the Taliban does remain resilient and will be able to threaten US and international goals in Afghanistan through 2011.”

Meanwhile, the UK report also questions the very feasibility of nation building in Afghanistan and the success of the surge. One of its key concerns is the high level of violence in Afghanistan at present and its impact on reconciliation and re-integration efforts. In Iraq in 2008, US generals could point to rapidly decreasing violence rates as proof the surge was working. Not so in Afghanistan.

The UN says violence and civilian deaths are rising dramatically, and whilst the military say this is to be expected from a surge, they miss the point. The question is whether the surge is having a positive impact. And when do they expect violence to decline? Most commentators, and the military, are expecting a summer of renewed fighting, so it doesn’t look the coming anytime soon.

Another worrying sign from the UK perspective is evident in media coverage of tactical operations. I served with the fine soldiers of 1 Royal Irish during summer 2008 in Sangin, and I am in no way doubting their bravery, determination and professionalism in the face of adversity. Moreover, I was not on the operation described here, so could of course be wrong in my assessment.

However, reading between the lines, conducting a large air assault, costing hundreds of thousands of dollars and involving hundreds of troops, only to find some small arms, grenades and IED equipment, is not the kind of military success that translates into strategic gains. Yet look at the language used to describe the operation by the MoD: to me, and I stress I am only an informed observer, it reveals a desperation to portray success when young men and women are dying to secure small and often irrelevant tactical gains.

And then see how this was reported by the UK media.

Tactical military gains must ultimately translate into strategic success or they are pointless. In Vietnam the military were heavily criticised for their culture of positivity that was detached from reality. The UK report highlighted that this as a worry in Afghanistan now.

Indeed, in a profession where promotion is based on successfully completing your allotted task, the military’s slant on reality will probably always be somewhat positivist, and the UK military’s previous “can-do” attitude probably did not help things either. But the military are not to blame for the absence of a tactical-strategic nexus in Afghanistan.

Politicians decide strategy, and in this regard it is the politicians who must shoulder the blame for pursuing the deeply flawed strategy of Afghan nation building.

One Response to “Growing doubts and worrying signs over Afghanistan”