Alan Simpson, former MP and government advisor on renewable energy, now sustainable energy advisor to Friends of the Earth, reports on the impact of the government's energy review. 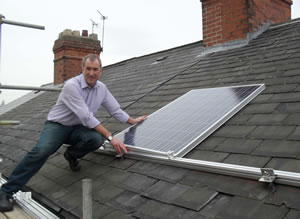 By Alan Simpson, former MP and government advisor on renewable energy, now sustainable energy advisor to Friends of the Earth

The Government’s ‘fast-track’ review of feed-in tariff (FITs) payments for renewable energy generation is a car crash waiting to happen – and it’s set to hit poor people the hardest.

In theory, ministers are reviewing a scheme barely 10 months old because they fear venture capitalists will turn southern England into a giant solar array and walk off with zillions in taxpayer subsidies. In practice, it is because the Department of Energy and Climate Change (DECC) has screwed up.

DECC never wanted the FITs scheme that Parliament forced upon it. Rather than follow Germany’s lead on community-generated power, ministers were comforted by energy companies lobbying hard to limit FITs to renewable energy installations of up to 50kW.

But the energy companies lost. When in office, climate secretary Ed Miliband told officials that FITs were here to stay – and not just as ‘eco-trinkets’ for the rich. Parliament set a 5MW ceiling on schemes eligible for payments, and was then trumped by David Cameron who pledged to double it to 10MW. Community-generated power was given a green light – with people set to earn and save money through green energy projects in their local area.

What a difference an election makes. ‘Big Energy’ is back in the driving seat. The government is in a panic. FITs funding has been capped at £440 million and further cuts are now likely. Schools, communities and housing associations may be stopped from generating green power – affecting some of the most vulnerable the hardest.

Britain’s FITs programme was on track to deliver 17,000 new jobs in its first year, but within a day of the review announcement, investment decisions were binned. Ernst and Young has downgraded the UK’s status as a safe place to invest, and businesses could end up going elsewhere. The government’s review of feed-in tariffs isn’t about controlling venture capitalists, speculators and costs. DECC simply hadn’t bargained for the huge influx of social housing applications in the FITs pipeline.

And decentralising electricity generation means breaking up a very cosy British cartel – which the government doesn’t want to do; but overall what’s still missing is a real lack of ambition for renewable power. The figures are really quite telling.

Last year alone, Germany installed more solar PV than Britain seeks to do in a decade. Putting solar PV on all of the south facing roofs of homes in the UK would meet more than 30 per cent of our electricity needs, and then there’s commercial and industrial buildings on top. And that’s before factoring in wind, tidal, geothermal and biomethane – Britain’s other largely untapped resources.

If we are going to avoid an energy crash at the expense of Britain’s poorest people, the government must limit its review to solar farms and allow other kinds of FITs to move forward.

Ministers should be trebling targets for community-generated power and kick-starting a green energy revolution. This will cut carbon emissions, create green jobs, and deliver real power to the people.