At Prime Minister's Questions today, David Cameron complained of "roadblocks" to reform of the NHS, but at first did not refer directly to the BMA. 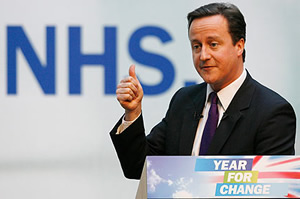 At Prime Minister’s Questions today, David Cameron complained of “roadblocks” to reform of the NHS, but at first did not refer directly to the British Medical Association; the doctors’ representative body, who called yesterday for the NHS bill to be dumped.

Then, in his answer to Ed Miliband’s final question, he said:

“He should remember the fact that the BMA opposed foundation hospitals, they opposed GP fundholding, they opposed longer opening hours for GPs’ surgeries.

It’s all a far cry from speeches in the early days of Cameron’s leadership, where he tried to reassure public service workers as to the intentions of a Tory government.

“I believe that the more you trust people, the stronger they and society become. In the NHS, that means trusting in the expertise and experience of health professionals.”

Considering more than 90 per cent of the British public trust doctors, while barely more than one in ten trust politicians, is the prime minister picking the right enemies?

20 Responses to “Has Cameron declared war on the BMA?”