David Cameron’s confused message over the Big Society took another blow after it was announced a charity at its forefront had its funding axed by the government. 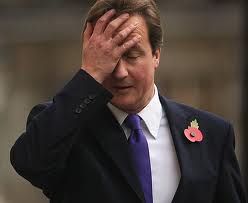 David Cameron’s confused message over the Big Society took another blow after it was announced a charity at its forefront had its funding axed by the government. Last year civil society minister Nick Hurd praised TimeBank for “countering the cynicism” about the Big Society concept; now its members appear to be adding to it.

“TimeBank, which has helped 300,000 people do voluntary work, was told yesterday it will not get any more support. The “devastated” charity said the decision completely undermined the PM’s vision.

“Mr Cameron wants voluntary groups to take over central and local government services. But a request by ­TimeBank for £500,000 in funding was turned down by the Office of Civil Society – the government department responsible for the Big Society.”

Helen Walker, chief executive of TimeBank, is quoted as saying the decision will “hugely undermine the government’s vision”. Miss Walker said her charity have made an important contribution to the voluntary sector over the past decade.

TimeBank are not the only charity doing good work in the voluntary sector to be in this position:

• VAST supports the development of voluntary and community organisations. It had to plan 16 staff redundancies after receiving confirmation from local government that funding for its children engagement and family support service will not be continued.

• Skillshare International is an international volunteering and development organization working to reduce poverty, injustice and inequality. It has announced the loss of a central government grant they have held for the last 40 years. It announced that at least half its staff will be made redundant as a result.

These are among a long list of other charities.

If David Cameron really believes in the Big Society concept as more than a soundbite why is funding being taken from the very groups, infrastructure and networks that are best placed to deliver real community and voluntary support.

25 Responses to “Conservatives build volunteers up then knock them down”