New research from Oxford University shows the 30-year race to the bottom on corporation tax. Large companies get away with paying less tax than small companies. 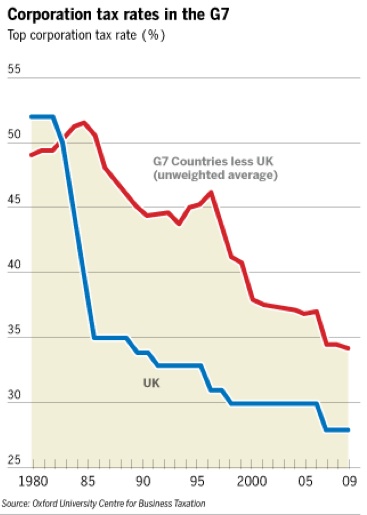 New research from Oxford University details how the G7, and Britain in particular, have been engaged in a 30-year race to the bottom on corporation tax with large companies getting away with paying less than small. The findings come as George Osborne plans to cut Britain’s corporation tax by a further four percentage points from 28% to 24%.

Examining the findings, the Financial Times reports that:

“Very large companies pay lower rates of corporation tax than smaller businesses, according to research by Oxford University that will fuel debate about whether big business pays enough tax.

The research from the Oxford University Centre for Business Taxation outlines that:

The report also finds that:

• The UK has the lowest corporation tax rate in the G7.

• For over 25 years the UK’s corporation tax rate has been well below the G7 average.

• Revenue in the G7 from corporation tax has stayed roughly at 3% of GDP while it has gradually fallen from a peak of 4.5% in the mid-1980s.

• The UK has tended to recover more revenue from corporation tax than other G7 countries but in recent years this has been due to tax reforms which encouraged small companies to pay personal income as corporation profit rather than as salaries.

A startling graph from the report – reproduced in today’s Financial Times and above – outlines the race to the bottom in detail. The fall has occured while VAT has risen over a similar period from 10% to 20%. The Oxford University report outlines that:

“in the June 2010 Budget, the government announced gradual corporation tax rate cuts to 24 percent over the next four years, which might further fuel downward competition.”