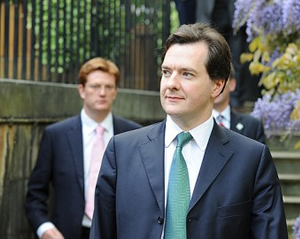 Chancellor George Osborne announced a “fiscally neutral budget” which recieved muted support from the right wing ( and some open disapointment), a rousing chorus of jeers from the left including a fine opposition performance from Ed Miliband – as Eleanor Besley wrote, his “best performance so far” – and a combination of both from Lib Dems.

Unfortunately for Mr Osborne, a bugdet that he billed as a “budget for growth” had to begin with him announcing a downgrading of the country’s growth forecast from 2.1% to 1.7%.

Ed Miliband’s speech could have written itself, although it did include some pretty fine jokes – Osborne is “Lamont with an i-pod”. Ouch.

A theme that was picked up in our live blog by Sunder Katwala, and also remarked on here by Jill Kirby was how similar to some of Gordon Brown’s budgets it was.

As Kirby put it:

“Rather than a sweeping away of regulation, there was a long list of micro initiatives.”

She went on to say that Osborne’s headline moment – the cutting of petrol duty – was a “Brownian wheeze”.

James Forsyth believes this measure allowed Osborne to “beat the expectations game” – some achievment seeing as most of the budget was leaked in advance – although one could dispute this claim. Forsyth wrote:

“His abolition of the fuel duty escalator for this parliament should – Elizabeth Taylor and Libya permitting – get him the front pages he wants. “

The Sun have been running a campaign to force the chancellor’s hand on the issue, so even if you hadn’t caught the parliamentary debate on the issue before the budget, one might have predicted such a move. In fact Left Foot Forward did. One might also have predicted the ensuing Sun headline this afternoon:

Another headline move – the merging of national insurance with income tax – has been pushed into “consultation”. So watch this space but perhaps without holding your breath. Also the reform of planning permission could have a big impact on communities and growth, although it has been called an “onslaught on environmental protection”, and this from the “greenest government ever”.

Somewhat unexpected was the rise in Green Bank funding and allowing it to borrow as well as lend by 2015. Although many commentators are already slamming this for not going far enough.

Also an increase on the “rate of R&D tax credits for small and medium-sized enterprises from 175 per cent to 225 per cent by April 2012” should go down well in the science and technology sector.

The highlight for eagle eyed commentators was Ken Clark falling asleep. Ed Miliband even referred to him falling asleep in a previous debate and was greeted with cheers from his own side of ‘alarm clock Britain‘. He went on to say Nick Clegg was an accomplice to Tory measures and had his alarm clock on snooze.