Yesterday's series of rebukes of the proposed NHS reforms by the British Medical Association (BMA) represented grassroots members going over the heads of their leaders, who had advised caution. 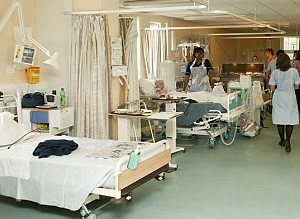 Yesterday’s series of rebukes of the proposed NHS reforms by the British Medical Association (BMA) represented grassroots members going over the heads of their leaders, who had advised caution. However, they were split on the issue of the tactical approach, with a narrow majority (54% to 44%) voting to continue the BMA’s current policy of “critical engagement” with the government.

At the first emergency conference since 1992 of the doctors’ trade union, members ignored leadership calls not to “tie the hands” of BMA negotiators. Instead, they voted overwhelmingly to call on health secretary Andrew Lansley to withdraw the bill.

“If someone tries to strangle you there’s only so long you can say would you mind only using one hand or would you mind using a breath freshener because your breath is making me sick.

“At some point you are going to have to give them the old Glasgow kiss.”

• For the BMA to actively lobby against “any willing provider” , on the basis that it will hurt the provision of healthcare in the NHS in favour of private industry;

• To call upon Andrew Lansley to withdraw the entire bill, arguing he had “no electoral mandate”

Motions were passed accusing Lansley of using “inaccurate and misleading information to denigrate the NHS” as part of his suggestion that UK cancer and heart disease survival rates compared unfavourably with the rest of Europe.

Mr Lansley also survived a no confidence vote – by the narrowest of margins: 50% to 48%. He is unlikely to take much comfort from it, given views such as from BMA Council member Dr John Chisholm:

“It is the policies that are wrong, quite irrespective of who is proposing them.”

Concern within the membership of the BMA had been growing since the summer about the union leadership’s strategy of “critical engagement” with the government over the reform details. The leadership narrowly survived on this issue, with the prospect of industrial action by doctors now receding. However, a proposal to ballot the entire membership on industrial action will be discussed at the BMA’s Council today.

The strong message from doctors is further evidence of the hardening opposition to the bill. Concern about fragmentation of NHS services and the role of private providers, chaos from scrapping 150 organisations and creating the world’s largest quango, plus the absence of a mandate: the NHS reforms are centre stage in the debate on the coalition’s political direction.

Doctors have consistently been named the profession most trusted by the British public, while politicians tend to loiter around the bottom. As such yesterday’s BMA opposition will have wider implications, not least in the Tory-supporting media where The Daily Telegraph continues to express its concern about the reforms.

David Cameron and Nick Clegg now face hard choices.  The Lib Dem leader will have to decide if NHS reform is to be the issue on which he stands up to the Prime Minster. His weekend comments about his own conference’s opposition “going with the grain” of existing government amendments to the bill suggest a basic failure to scrutinise the reforms. The Lib Dem junior minister, Paul Burstow, has been a cheerleader for the plans so far.

Mr Cameron, meanwhile, faces either many months of negative publicity about the NHS under his stewardship, as reform opposition hardens and a tough financial settlement plays out as service restrictions – or the humiliation of a u-turn on reforms he has actively promoted.

10 Responses to “BMA’s ‘Glasgow Kiss’ for the coalition”