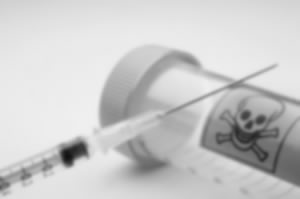 Today, the All Party Parliamentary Group on the Abolition of the Death Penalty will hear evidence from the mother and brother of Brandon Rhode, who was executed in the US state of Georgia in September last year with drugs imported from the UK; here, Oliver Sprague, Amnesty International UK Arms Programme Director, outlines the issues surrounding UK export of fluids for lethal injections and the action the government should take

For many years Amnesty International has warned that lethal injection executions in the United States and elsewhere have been causing excruciating pain and extreme mental suffering to the condemned prisoner right up to the moment of their death.

Here’s why. The lethal injection generally involves the intravenous introduction of three chemicals into the body:

If the anaesthetic is inadequate or causes an unexpected reaction, the pain caused by potassium chloride in the blood system and subsequent heart attack could be intense, while paralysis may mean the victim is unable to even cry out, horrifically and agonisingly trapped in a “chemical straitjacket”.

Amnesty is categorically opposed to capital punishment in all circumstances and by whatever method. But it’s important to note that contrary to the notion that killing by lethal injection (as opposed to hanging or the electric chair) provides a “clean” or “pain-free” way of executing prisoners, the evidence actually points the opposite way.

Now a sudden shortage of sodium thiopental in the US has thrown up a macabre situation where individual states appear to be hunting around for fresh supplies. Last autumn it emerged a UK company based in Reading may have manufactured the sodium thiopental used in the execution of a prisoner in Arizona. Since then there have been further alarming reports that a west London company has been supplying the drug to US buyers.

In November Amnesty wrote to the business secretary Vince Cable alerting him to the UK’s obligations (under EC Regulation 1235/2005) to prevent the export from the UK of goods involved in capital punishment or torture. Moreover the UK has a policy commitment to oppose capital punishment globally and to press for its abolition.

Under pressure from campaigners, the government then announced it would introduce export controls on sodium thiopental itself, a welcome but extremely limited move that fails to address a fatal flaw with the UK’s export controls regime. Naming the drugs themselves is a welcome step, but it’s not enough; what’s required is a set of controls operating according to the likely end-use of the goods concerned and a rule that stops the export of any drugs or equipment where the supplier knows or has been told of its likely use in executions.

This is what the government promised to introduce within the EU more than two years ago, but no progress has been made.

It’s no use stopping sodium thiopental leaving these shores if next week a different UK-manufactured lethal injection drug is found to be in shipments bound for the USA, China or any other country where they’re fastening people into chemical straitjackets as they put them to death.