Some people say signing petitions and emailing MPs never changes anything - but it did this time, with the government's u-turn on the forests sell off, writes Johnny Chatterton. 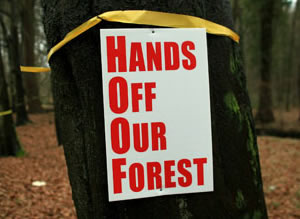 Johnny Chatterton is the Digital Campaigns Manager of 38 Degrees

Victory! The Guardian, BBC and Independent are reporting that the government is about to scrap their plans to sell our forests.

Some people say signing petitions and emailing MPs never changes anything. But it did this time. This is what people power looks like: there are over half a million of us feeling very proud of what we’ve achieved together today.

When the plans were published in October, 38 Degrees members quickly voted that we should launch a campaign. Since then the campaign has grown and grown:

• Thousands of people have turned up to local events in forests all around the country and set up local “Save our Forests” groups;

• Hundreds of members donated to fund a people-powered YouGov poll which found that 84 per cent of the public wanted the forests kept in public hands;

• More than £60,000 was raised from thousands of donations to pay for ads in national newspapers to highlight that 84 per cent of the British public opposed the forest sale.

The government has been feeling the pressure from across the country. Celebrities and signatories added to the pressure with their letter to the Sunday Telegraph. Dozens of local groups have been campaigning and some big environmental NGOs like the National Trust, Friends of the Earth and Greenpeace got involved too.

For the half a million people who pooled their energy through 38 Degrees today is about celebrating what we all achieved together. Tomorrow we’ll start answering the important question – what do we do next?

24 Responses to “How many people does it take to change a government’s mind?”