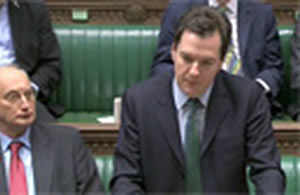 The long awaited outcome of the government’s “Project Merlin” deal with the banks has been published. Questions are already being asked about the failure of government to get tough on bonuses and the low level of transparency on pay, but perhaps most worrying is the failure to deal with the central question of bank lending to support the recovery.

Chancellor George Osborne has been keen to talk up that the banks have agreed to extend loans worth £190 billion to UK business in 2011, up from £178bn in 2010 – but there are two very important caveats to this.

First the agreement is for gross lending rather than net lending – i.e. it only refers, it takes no account of repayments on existing loans. It would be perfectly possible for banks to issue gross loans of £190bn but fund this by calling in old loans. What matters for the UK is not gross lending but net lending.

The coalition agreement (page 9 of the pdf) emphasised that net lending targets could be introduced to ensure that banks lend to small and medium sized businesses:

“We will develop effective proposals to ensure the flow of credit to viable SMEs. This will include consideration of both a major loan guarantee scheme and the use of net lending targets for the nationalised banks.”

This now seems to have been abandoned. As business secretary Vince Cable commented less than a year ago:

“This would be completely letting the banks off the hook. It’s perfectly possible for banks to achieve a gross lending target while withdrawing capital from small to medium-sized businesses.

“Even if they have a gross target, what assurances do we have that it will be enforced, because the banks have been running rings round the Government so far?”

This looks like a climb down from Vince Cable and a victory for the banks.

Furthermore, the agreement includes a let out clause for the banks:

“Each bank’s lending expectations, capacity and willingness, as set out above, will be subject to its normal commercial objectives, credit standards and processes and regulatory obligations, as well as the availability of the required funding.”

This potentially provides the banks with a ready made excuse when they fail to meet the targets. As the graph above shows, loans to UK non-financial companies have been falling for 18 months; this agreement may do nothing to reverse that trend.

34 Responses to “Banks let off the hook on lending”