The Prime Minister will attempt to relaunch his "mission in politics" today. There are five reasons why you can't trust David Cameron with the Big Society. 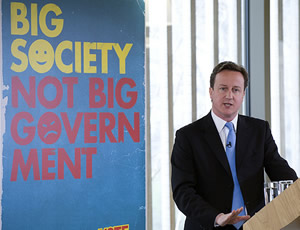 The Prime Minister will attempt to relaunch his “mission in politics” today by setting out details of how a £200m bank will fund voluntary projects. Getting more people to volunteer is a laudable aim, but there are five reasons why you can’t trust David Cameron with the Big Society.

1. The voluntary sector is losing billions in Government support

David Robinson, founder of Community Links and a “key supporter” of the Big Society, called on the government to impose a six-month moratorium on local authority cuts to third-sector programmes, and to pump hundreds of millions of pounds of taxpayers’ cash into the big society bank to ensure vital charities and community groups survive beyond the next few months.

Dame Suzi Leather, chairman of the Charity Commission, has warned that cuts of up to £5 billion from key charities could “pull the rug” out from under Mr Cameron’s dream. A number of third sector groups have put together the Cuts Watch website to document and map the impact of cuts on third sector organisations. For example, the Citizens Advice Bureau is being cut by 45 per cent.

Sir Stephen Bubb, who heads the Association of Chief Executives of Voluntary Organisations, said charities and social enterprises were already having to make redundancies and scale back their work. He told Sky News:

“You can hardly build a bigger society if the very people at the heart of that vision are cutting back on the work they do.”

Indeed, NAVCA, the national voice of local support and development organisations in England, has estimated that 26,000 charity staff will lose their jobs in 2011.

2. The number of volunteers and people in the voluntary sector is going down

As documented on Don Paskini’s blog, from 2000 to 2004, the number of people working in the voluntary sector rose steadily by 200,000. But in the first few months of Big Society between July and September 2010 it fell by 13,000. Analysis of the Labour Force Survey by three voluntary sector organisations reported by Third Sector showed that the sector employed 793,000 people during the third quarter of 2010, down from 806,000 in the previous three months.

David Cameron’s Big Society czar, Lord Wei, has returned to working his “agreed hours” after doing overtime in his role encouraging more community volunteering. According to the BBC, the former management consultant is reported as saying he wants to earn money and have “more of a life”.

And as the Wall Street Journal’s Iain Martin has written:

“The sociologist Amitai Etzioni conducted a major international study of volunteerism. He found that volunteering is highest where state funding is highest, and lowest where state funding is lowest. So high-tax Massachusetts has the most volunteers in the US, while low-tax Mississippi has the fewest. High-tax Sweden has the most volunteers in Europe, while low-tax Eastern Europe has the lowest. Far from “crowding out” volunteers, a big state attracts them, and a small state drives them away.”

The Civil Society publication reported last week that banks will earn a profit on the £200m pledged to the Big Society Bank by the UK’s high street banks as part of Project Merlin. The Project Merlin agreement outlined that lending would be on a “commercial basis“. Condemning the move, Geoff Mulgan, chief executive of the Young Foundation, told today’s Financial Times:

“If the Big Society Bank operates like a commercial bank providing money on essentially commercial terms to a series of retailers, then most of the money will go unspent.

“The reason is that there simply aren’t that many social ventures ready and able to take commercial money.”

As Bagehot’s notebook from The Economist put it:

“the public is mistrustful of any vision for Britain that blends altruism with the profit motive. And that is a big problem for the Big Society, which just does not add up if it does not include a dose of private enterprise.”

“the true Tory character was revealed at its Black and White Party last week, in which five ‘internships’ at City banks were auctioned to wealthy Conservative-supporting parents for their children, with the £14,000 raised going to Tory funds.”

Hardly surprising when you remember that the City is in Cameron’s blood.