Ed Miliband and Ed Balls have accused the Conservative party of trying to drive the last government further away from regulating the activity of the City of London. 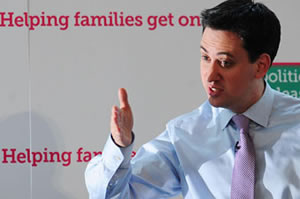 Labour leader Ed Miliband and shadow chancellor Ed Balls have accused the Conservative party of trying to drive the last government further away from regulating the activity of the City of London.

Miliband today apologised for Labour’s part in allowing the ‘boom’ to get out of control before the economic crash, but was quick to remind critics that economies globally were affected.

“It is true to say that governments around the world got regulation wrong and the Tories were encouraging us to deregulate further.

“So this was something that politicians, economists, central bank governors, regulators, all got wrong collectively.”

His comments were in sync with recently appointed shadow chancellor Ed Balls’s regular column in Tribune magazine, out today, which similarly pointed out that lacklustre regulation of the City was the mistake of the Conservative party as well as Labour:

“Of course we didn’t get everything right. On regulation, Britain, America and the rest of Europe underestimated the risks.

“We should have ignored the calls from the Conservative Party and others – who at the time complained we were being too tough on the City – and been tougher still.”

As Left Foot Forward reported earlier today, George Osborne’s u-turns and change in rhetoric surrounding bank regulation is enough to make your head spin. In the good times, before the current government was elected, the then shadow chancellor hailed Ireland as:

“A shining example of the art of the possible in long-term economic policymaking.”

He went on, in the same Times article, to blame “chronic overregulation” for Britain “being left behind”; perhaps a euphemism for being left behind in the queue at the IMF. Idolising Ireland’s laissez-faire approach to the financial industry may be not be Osborne’s only misjudgement. The coalition’s prop of blaming the last government is nearing its sell-by date, and so may the Plan A approach to bringing down the deficit.

As Will Straw wrote for Left Foot Forward earlier this week, the Institute for Fiscal Studies’ most recent report highlighted the need for the government to consider an alternative, slower pase of fiscal consolidation – in other words, a Plan B.

Whether Mr Osborne is secretly putting an alternative arrangement together or not, tightening regulation of the financial sector will not, politically, be a policy for a chancellor who wishes to be remembered well by the Conservative elite.

27 Responses to “Miliband: “Tories were encouraging us to deregulate further””