Colonel Gaddafi made a quite extraordinary speech this afternoon, vowing to stay on and "die a martyr"; here, Seph Brown looks at the British left's questionable relationship with the tyrant. 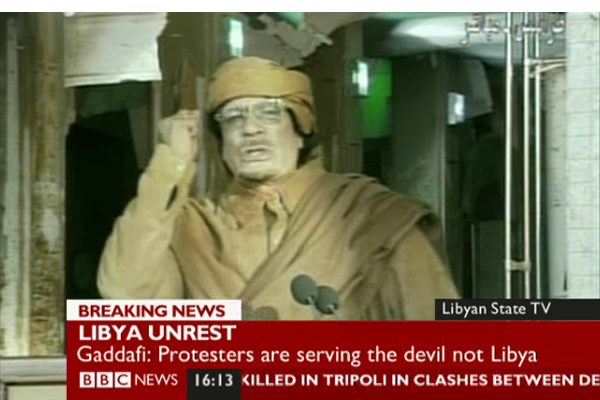 Libyan despot Colonel Gaddafi made a quite extraordinary speech this afternoon, saying the protesters against his regime were “serving the devil” and vowing to stay on and “die a martyr”; here, Left Foot Forward’s Seph Brown looks at the British left’s questionable relationship with the tyrant

Before discussing the rapidly deteriorating situation in Libya, the Labour Party and the wider British left should engage in serious self-reflection. From Tony Blair to Ken Livingstone, from Alex Salmond to George Galloway, we on the left have often had questionable relationships with Gaddafi’s brutal dictatorship.

It is equally important to remember that ‘brutal’ is not a word which applies only to recent days.

Before strafing their own citizens from the air this week, Gaddafi’s regime had supplied and given haven to the IRA, was responsible for the 1984 murder of PC Yvonne Fletcher in London, has been implicated in the Lockerbie bombing and in 1996 massacred 1,200 political prisoners at Tripoli’s Abu Salim Prison.

This is the measure of the man the left has never got to grips with.

The favourite target for criticism over Britain’s links with Libya is clearly Tony Blair. After all, he was essentially responsible for the international rehabilitation and rearming of Gaddafi’s regime. There is no way of knowing if the men opening fire on protesters were those trained by the UK under Blair’s deal.

Some are keen to defend Blair’s role as a pragmatic, necessary and ultimately sensible trade-off. Michael White at the Guardian calls on commentators to:

“Blame Libya for what is does with its weapons – not Blair or Britain.”

Appealing to the messy and complicated nature of international diplomacy.

However true the benefits of Libya’s reintegration into the global community, the fact remains that Blair never appeared to predicate any part of it on improvements in human rights and domestic freedoms in Libya. While Rentoul and others may argue that trade and communication ties acted as a liberating driver – aiding the emergence of democratic forces – the ruthless response to the protests is as much a part of the Labour government’s timidity in pressing for reform earlier on.

But before we single out the former prime minster, we should recognise that few main players on the British left have avoided some connection with the Libyan regime.

Ken Livingstone raised eyebrows through his connection with friend and colleague Gerry Healy, the head of the Workers’ Revolutionary Party of the 1970s-80s. The WRP is said to have taken £500,000 from Libya and as one splinter group recalls:

A draft resolution adopted by the WRP Political Committee on July 28, 1980 declared that:

“The Workers Revolutionary Party salutes the courageous and tireless struggle of Colonel Gaddafi whose Green Book has guided the struggle to introduce workers’ control of factories, government offices and the diplomatic service, and in exposing the reactionary maneuvers of Sadat, Beigin and Carter…

“We stand ready to mobilize the British workers in defense of the Libyan Jamahiriya and explain the teachings of the Green Book as part of the anti-imperialist struggle.”

Naturally Livingstone dismissed this link as a smear campaign, and it could be that the former mayor was being treated guilty by association, but he and the WRP are not the only left-wingers to be implicated in a Libyan connection.

Scottish first-minister and nationalist Alex Salmond is on the record opposing the inclusion of the Lockerbie Bomber Abdelbaset Mohmed Ali al-Megrahi in the Prisoner Transfer Agreement with Libya. In a letter to the US Senate committee on foreign relations he wrote:

“The Scottish government rejected the application for transfer of al-Megrahi under the PTA specifically on the basis that the US government and families of victims in the United States had been led to believe that such a prisoner transfer would not be possible for anyone convicted of the Lockerbie atrocity.”

His governing party then released the convicted terrorist on ‘compassionate grounds’.

Earlier this month Jack Straw accused the SNP of having “selective amnesia” over their willingness to negotiate concessions from Westminster in return for the release of al-Megrahi. It would also seem unlikely that a June 2009 visit from Qatar’s acting minister of business and trade, Khalid bin Mohamed al-Attiyah, did not weigh on Salmond when he suggested that investment in Scotland may depend on al-Megrahi’s release. The SNP deny any deal was done.

Moreover, former Labour MP and Respect leader George Galloway should also be viewed with suspicion when he openly admits that he once viewed Gaddafi as an Arab leader who “made a stand” for the Arab world.

He now says he views him as just another dictator, which may seem reasonable until we note that he accepted a donation of 100 supply trucks from the Gaddafi Foundation to join his humanitarian ‘Viva Palestina’ convoy to Gaza.

It cannot be argued that Tony Blair is free from culpability with regards to Libya, but it is also clear that he is not the only one. The curious reality of the left’s involvement with Gaddafi is that of the various motivations which inevitably lead to the same place. While Blair was driven by realpolitik, Livingstone fell prey to gesture radicalism standing by his hard left long-time friend; Salmond wanted to advance his government’s bargaining position; while Galloway wanted to advance himself.

All of these rationales, to varying degrees, make one thing clear: the left missed the implications of putting certain motivations before the brutality of dictatorship. Whether through action or inaction, each of these figures played a part in normalising the Gaddafi regime.

The British left must develop a more consistent stance on engagement with Libya and dictators around the world. We cannot pick and choose which dictators are tolerable and at what price engagement should be bought.

Engagement with authoritarian regimes must come with human and civil rights guarantees at the very least, something the left, from Blair to Galloway, has never demanded of Libya.