Boris Johnson held more meetings with bankers and the financial services industry than with government ministers, the Met police, his electors or the press since coming to power. 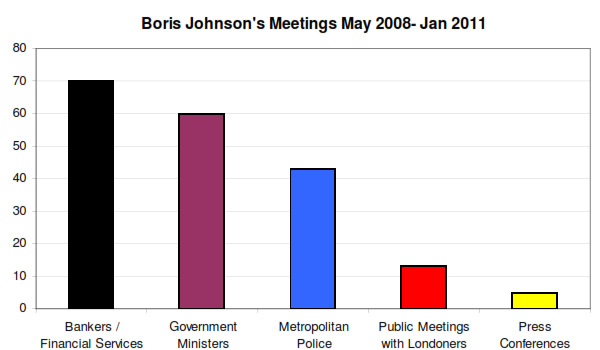 Boris Johnson, forever defending the indefensible over bankers’ obscene bonuses, has held more meetings with bankers and the financial services industry than with government ministers, the Met police, his electors or the press since coming to power, new figures out today reveal.

Between May 2008 and January this year, the Mayor held 70 meetings with bankers and financial services types, 60 with ministers, 43 with the Met, and only 13 public meetings with Londoners and five press conferences.

“These latest figures show that bankers, not the majority of Londoners, are the Mayor’s priority and that is reflected in his political choices, calling for lower taxes for the richest whilst putting up fares and cutting police services for the majority.”

While in an article in this week’s Tribune magazine, he says:

“The Tories deserve to be behind in the polls – even before the full scale of what they are planning has come on track. I have never known party lie so brazenly during a campaign. Cameron’s big idea is a Robin Hood in reverse.

“The majority is being forced to pay through fees, fares, VAT, cuts and reduced living standards, pay and conditions for an economic situation they did not create, while the bankers sit pretty.

“The Tories’ representative in London, Boris Johnson, was correctly described by the Liberal Democrat peer Lord Oakeshott as ‘rattling the begging bowl on behalf of the starving rich’.”

Oakeshott was last week forced out from his role as Lib Dem Treasury spokesman for standing up to the government over bonuses; as shadow chancellor Ed Balls said:

“It is a sad commentary on this Tory-led government that Lord Oakeshott has been forced to pay the price for daring to tell the truth.”

Also last week, it was revealed that more than half of Tory funds come from the City – double the proportion of when Boris’s chum David Cameron came to power. No wonder the Tory leader said: