The Netroots UK workshop with the potential for the biggest immediate impact focused on building an infrastructure for the left, reports Tom Rouse. 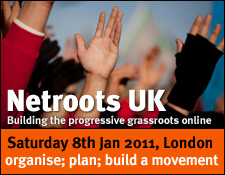 Tom Rouse, co-founder/editor of The Grapevine website, reports on the “building an infrastructure for the left” workshop at Saturday’s Netroots conference

The Netroots workshop with the potential for the biggest immediate impact focused on building an infrastructure for the left with speeches and discussion from Labour List’s Mark Ferguson, vice president of the National Union of Journalists (NUJ) Donnacha Delong, the founder of Political Scrapbook Laurence Durnan, the former head of new media for the Labour party Sue MacMillan and the founder of Conservative Home Tim Montgomerie.

The common theme that bound the whole session together was the need for political bloggers to engage more effectively with more traditional organisations, particularly the Labour party and trade unions. MacMillan said that it was only through the Labour party that the left can regain power and that bloggers must be willing to work with the party, to further shared ends.

Delong argues that what was most needed was a more symbiotic relationship between online activists/bloggers and the unions, particularly the NUJ, which provoked some controversy, a union member arguing that the unions should have no part in the violent action that scarred the student protests. His argument seemed to be least well accepted by the audience who appeared to have had little involvement with the unions.

Durnan reinforced the need for a solid infrastructure to be built by comparing the stability of the right thanks to its long-running blogs and the fragmentation of the left. Particularly startling was the comparison between the Total Politics leading blogs in 2008 and 2010, with leading contemporary sites such as Liberal Conspiracy and Left Foot Forward having a much smaller impact in 2008.

He argued that some kind of unifying structure was essential to remedy this and equally crucially attract donations through a shared fundraising infrastructure. The first steps have already been taken towards this goal with the establishment of a server to host blogs for activists.

The Q&A that made up the majority of the session sparked some of the most charged debate of the day. In particular, Montgomerie, unsurprisingly, attracted criticism for warning of the dangers of allowing extremist views a platform.

His own work in organising the ‘There is Nothing British about the BNP’ campaign and suggesting the left may need to consider something similar was described as a “witch hunt” by an elderly gentleman who furiously accused Montgomerie of implicitly branding the Communist left as being the equivalent of the BNP.

Such an implication did not seem to be Montgomerie’s intention; especially given the comment was made in response to a question about how Conservative Home had avoided being taken over by the hard right.

When asked whether the panel thought there was a danger of there being an over saturation and too many voices shouting to effectively be heard, the response was surprisingly unified. The panel all agreed that such a possibility was remote, with Durnan remarking that in many ways blogging is a very effective meritocracy. The blogs with the best content will rise to the top and it is these which will be listened to.

The session ended with the panellists giving their one big idea for blogging in 2011. The most important of these, and a point he had stressed throughout the session, was Montgomerie’s call for someone to step up to the plate and provide an aggregation service to bring the best content from each left wing blog together.

Such a step seems crucial if the goal of building a solid online infrastructure to oppose the coalition and promote a more responsible approach to tackling the deficit is to be realised; Ferguson hinted that Labour List was working on just such a platform.