At today's Fabian Society conference Simon Hughes said that he opposed the cuts to Education Maintenance Allowance and housing benefit and the NHS reforms. 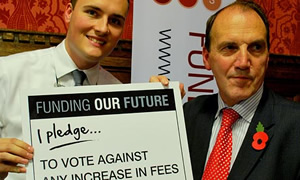 Simon Hughes, deputy leader of the Liberal Democrats spoke at length on the coalition policies he personally opposes today. Will Straw, a resident of Hughes’s constituency of Bermondsey and Old Southwark, set the early tone for the debate by outlining six principles which should be used to judge the government’s fairness agenda; constitutional and civil liberties; environmental issues and foreign policy; public services and the economy.

It was this last test Straw accused the coalition government of comprehensively failing. As outlined here, 3,267 students in his constituency will be affected by the abolition of Education Maintenance Allowance and 1,340 people will be affected by the proposed cut of housing benefit by 10 per cent, a move described by Douglas Alexander as indefensible when those who have been job hunting for 12 months or more facing competition from four other people for every vacancy.

In response Hughes vowed that he would vote against the 10 per cent cut in housing benefit and claimed that he had directly challenged the government in private over this issue. Similarly he pledged – depending on the wording – to support a Labour opposition day motion opposing the abolition of EMA, adding that he had been in talks both private and public with Andy Burnham about how best to do this.

He agreed with Douglas Alexander on the need for consensus for any potential replacement and called for patience over the issue, describing the need to work with Labour to ensure young people are not disincentivised from going to college and that the new system ensured that funds are available for travel and resources where they are truly needed.

When the debate inevitably turned to tuition fees, Hughes was heckled by the crowd for claiming that the Liberal Democrats were the only party still committed to the eradication of tuition fees. His claim that if he was a backbencher he would have voted against the proposal drew further heckling and  unanswered questions from the crowd over why he didn’t resign. In defence he merely reinforced the party line that fees of £600 would be the norm and that £9,000 would only be charged in exceptional circumstances, a statement that was not well received by attendees but went unchallenged by the panel.

The issue of pluralism and how Labour and the Liberal Democrats could cooperate dominated the latter half of the debate. Douglas Alexander’s referred to the success of the Labour-Liberal Democrat coalition in Scotland between 1999 and 2007 as a successful example of this and a model for potential future cooperation between the parties.

Similarly the potential for cooperation arose concerning the issue of proposed reforms to the NHS. Hughes’s remark that in their current form there was no chance of them getting through the Commons, suggested that the Liberal Democrats were willing to vote against the Conservatives if the situation arose. This argument also confirmed Straw’s earlier comment that Andrew Lansley was probably the only man in Britain who supported these reforms.

In spite of his voiced opposition to large branches of coalition policy, Hughes confirmed that he would not walk away from government, stating that it was a five-year deal and he would honour the terms of the coalition agreement. But given the audience he was keen to qualify this:

“I’m there to deliver Lib Dem policy. I want a progressive government, the Conservatives are not my natural ally and not are they the natural ally of most Liberal Democrats.”

The panel ended with a commitment from both Hughes and Alexander to pursue opportunities for the true progressive parties to work together wherever possible. The Yes to AV campaign, and possible coalitions in Holyrood and Cardiff after the May elections, were highlighted as examples of current and potential future cooperation.