This last week has seen the clash of canteen culture, ethical disregard and political bullying in the News Corporation empire, writes Joy Johnson. 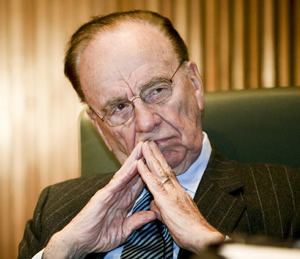 This last week has seen the clash of canteen culture, ethical disregard and political bullying in the News Corporation empire. Murdoch senior is locked in Wapping instead of the rarefied atmosphere of Davos; he must be furious, not only at the Ofcom decision, but phone hacking by his journalists, in pursuit of personality driven gossip, and exclusives to fill the pages of the News of the World.

Sexist language from overpaid commentators is another further distraction from getting total control of BSkyB. News today that half-yearly profits rocketed to £520 million make that an even greater prize.

This whole affair speaks to much wider issues about ethics and public accountability. For the Metropolitan Police its failure to take the hacking allegations seriously has led it to launch a fresh investigation.

On BBC News Channel former Scotland Yard assistant commissioner Brian Paddick, who believes his phone was hacked into by another newspaper, accused the force of running scared of the press:

“There is a whole media machine at New Scotland Yard, designed to try and make sure the police are portrayed positively in the media. The last thing the police want to do is to upset newspaper editors, which could result in biased reporting against the police.”

This comes hard on the heels of undercover police sleeping with climate change activists to get information.

Paddick’s accusation of running scared of the press echoes Tom Watson who said in a debate in the Commons last September that Rebekah Brooks, chief executive of News International, refused three invitations to appear before the Standards and Privileges Commitee. She should be called, he suggested, as should Rupert Murdoch.

There is a “tawdry secret” said Watson – “MPs are scared of powerful newspapers”.

Fortunately for us Watson and the Guardian journalists haven’t been scared from pursuing an issue that is central to trust and public accountability. The myth that ownership doesn’t matter only ‘what works matters’ has been well and truly exposed.

Responding to Ofcom’s decision, Sky went on the attack accusing it of recasting the statutory formulation of the “media plurality” test and distorting the manner of the questions which it should have answered.

And then with more than a hint of ‘menace’ Jeremy Hunt was told:

“Sky submits that it is therefore particularly important that, in the present case, the Secretary of State should assess the ‘raw’ evidence summarised by Ofcom in its Report with an open mind, and by reference to a correct understanding of the relevant media plurality test.”

Instead of referring the bid straight away to the Competition Commission Jeremy Hunt rolled over and gave Murdoch snr. and jnr. more time to make their case. As a senior shadow minister told me:

“If Murdoch gets hold of yet more of the British media then heaven help those of us who believe in pluralist democracy.”

11 Responses to “Murdoch and Ofcom – why ownership matters”