What if an early warning system existed that could raise the alarm on the next financial crisis? Stephen Fitzpatrick, of Profero, investigates. 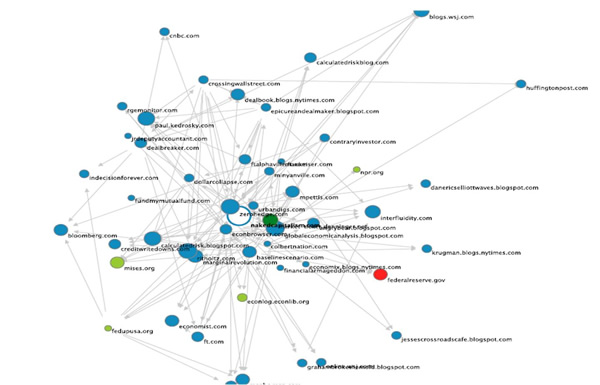 What if an early warning system existed that could raise the alarm on the next financial crisis? What if such a network already existed before the crisis, but we simply didn’t know where to look? It would certainly have been helpful to politicians and regulators in the UK.

There were signs for those prepared to look for them. Some UK journalists such as the BBC’s Robert Peston and the Financial Times’s Gillian Tett should be mentioned in dispatches. A few City of London professionals such as private equity mogul Jon Moulton voiced his deep misgivings about the extent of leverage in financial institutions globally, long before the crisis broke.

Bu the reality is that during boom times in politics and finance, those voices – even when they are as high profile as Mr Peston – are usually drowned out. We think the latest research from Mindful Money points to a new extensive source of information, an informal network of independent websites, some close to the sources of the last crisis, which might help politicians see the next one coming.

The report, Social Media: the New Influentials, shows how an increasing number of web and blog sites connect to each other, how they influence the debate and influence investors, providing, in the process, an alternative viewpoint to the established media. We list the top twenty.

This informal network, which we have mapped in the chart below, includes economists, Wall Street professionals and independent Wall Street watchers with views from across the political and economic spectrum. The UK and the City of London, contribute fewer voices but we would argue that does not necessarily diminish the usefulness of the network.
The report is part of Mindful Money’s ongoing work to challenge the way we think about saving and investing, in particular, considering the impact of social media. We have provided a few examples below, charting how Twitter is affecting markets and how ethical investing bucked the downturn and considering the latest thinking on the psychology of saving.

In terms of the New Influentials, it is true that a typical user of these sites is looking for useful investment information so they can steal a march on the crowd and make money, taken collectively the network also gives a very useful economic and financial view, in effect, an early warning system.

The last crisis had its ultimate cause in global trade imbalances. But at the next level down, it was the resulting easy credit in the developed world that led to reckless lending, primarily though not exclusively in the US. These loans were then parcelled up and insured by some too-clever-by-half investment banks and one global insurer. Other banks proceeded to borrow money to buy them before selling them on to other banks and then borrowing some more and buying some more and so on and so forth till the whole thing crashed.

We think the 20 pairs of eyes or more, including market experts and market sceptics, within this New Influentials network may prove to be a more powerful watchdog than the traditional fourth estate. It barks a lot sooner and that may put the official regulators like the FSA on their guard.

Members of the network, some of whom are deeply sceptical if not of Wall Street then of Wall Street’s prevailing wisdom, tend to agree.

Here is the view of one site, Naked Capitalism:

“Given how many of these top blogs are critical of the status quo, this map may be a hopeful sign that the blogosphere is beginning to become an important channel of discourse outside the reach of the PR machinery of major corporations and government entities.”

And this is a quote from one prominent US investor, Bjorn A Jorgensen:

“Financial blogs have covered the events leading up to the credit crisis much better than the mainstream media. Thanks to them, I have made good money from the crisis.”

So that is about making money, but here is our challenge to the readers of Left Foot Forward.

In the US, this network has strong links to regulators and government suggesting that now at least they are listening. In the UK those online network connections do not appear to exist. To set it in context, one of the journalists who did warn of the crisis, the Financial Times’ Gillian Tett has often expressed her frustration that the City of London and MPs never listened to each other and never bothered to understand each other.

Or to put it another way, Barclays boss, Bob Diamond may be feeling the political heat in London, but what do UK politicians think about the fact that several newly elected Republican in Congress want to repeal the Obama administration’s financial legislation? That legislation is meant to prevent a repeat of the crisis.

The New Influentials network won’t be entirely in agreement, some may even think it is bad law, but the debate will be informed on an issue that is arguably more important to the global system than the furious domestic rows over bonuses.

We suggest the British political world needs to start to understand where the risks are building up and this network might be one place to start; after all, do you think the public would forgive a political party or parties which missed the next crisis and let it happen all over again?

17 Responses to “Prediciting the next crash”