Aaron Peters writes about open source consensus, and explains how networks can be deliberative, accountable and consensual in decision making and acting. 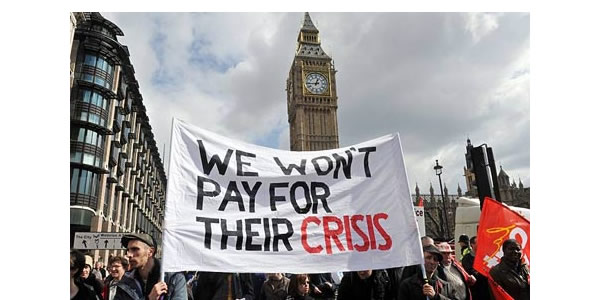 One of the big stories at the end of 2010 was the emergence of a number of social movements engaging in the biggest flood of direct action this country has seen for decades. Working synchronously the National Campaign against Fees and Cuts, the London Student Assembly and student occupations across the country worked with sixth-formers, schoolchildren and sympathetic members of the public in arguing against the removal of the cap in higher education tuition fees, gaining widespread media attention and pushing the parliamentary vote much closer than was previously thought possible.

Elsewhere actors like UKUncut and False Economy have functioned in a manner that has been described previously as ‘open source’ behaving in a networked and autonomous manner in making an impact. For such actors there is no structural hierarchy or bureaucracy and anyone who wishes to participate and actively contribute to the group can do so. These networks in many ways represent organising without organisations.

There has been something of a debate as to whether such ‘open source’ actors are indeed any better than organisations, with some claiming that such actors will necessarily have to compromise their structures as time goes on and will eventually come to imitate the social movement organisations (SMOs) of the past with top down hierarchies of leaders who represent the interests of ‘members’ rather than participants.

In response to such claims these networks claim that they are inherently more flexible, dynamic and are more capable of reacting to fast changing events than those of centralised, hierarchical organisations with bureaucracies that by their very nature hinder quick and effective decision making as we so desperatly saw with the National Union of Students (NUS).

A UKUncut event by the name of ‘The Feeling is Mutual’ was recently organised by myself and several other participants within the network to highlight co-operative models of business as being superior to those that seek merely to extend shareholder value and little else. The objective was to educate and inform the public of the superiority of such business models and start a debate as to what kinds of model we would like to see regarding British banks in the future, be it credit unions, mutuals, banking co-operatives or outright nationalisation for certain players such as RBS and Lloyds.

The event subsequently received a very mixed response, with many passionately for and others passionately against. Most, however, were unsure and felt ill at ease holding a company such as John Lewis as a model for the future given it does not even allow worker unionisation despite its merits relative to every other business in the West End.

Consequent to this response the event has been called off and will be replaced with another action for the same day (as some rather logistically innovative stuff has already been organized for the usual … Arcadia ahem … suspects) that will focus, as has previously been the case, on corporate tax avoidance and also the increase in VAT which will hit the poor the hardest.

The online disagreement was mostly conducted in a deliberative manner in the spirit of solidarity and indeed taught myself and no doubt others some under-reported home truths about the John Lewis group for which I am grateful.

The discussion it engendered about how many within Uncut and the Left feel about co-operative models of business was also highly informative – as always with networked movements, the participatory element of the ‘process’ was in many ways as productive as the end. I learnt about other people’s sentiments on the matter as well as facts, many of them utterly unexpected; this is how movements build consensus on certain issues, through trial and error.

This feedback loop of a mixed collective response on Twitter, Facebook and the blogosphere to the action in part shows the power of networked movements and organising without organisations. While it is true that anyone can set up an action and be entrepreneurial in fostering dissent with such models, it is also true that this same model allows such individuals the ability to see if consensus forms behind the action in the form of online support through social networks – there was not consensus in this instance and subsequently the only appropriate course of action, in order to stay true to the spirit of our movements, was to cancel it.

While some claim we need organisations with democratic representation in order to make a difference moving forward, others are worried that in so doing we would renounce the autonomous dynamics that have made these movements so vibrant and successful. In this instance the network model responded much more quickly than an organisation ever could; would the NUS change position under similar conditions? Historically we know it didn’t, several times.

The lesson from the whole event is this – networks can be more powerful than organisations in fostering dissent and for that to be the case individuals and groups must be innovative in ideas and actions. That is why this model has proved successful so far. However, these same individuals and groups must be reminded that where there is not a broad consensus behind a particular action this model fails.

As with open source code software, open source protest is subject to Linus’ Law, namely that all content is transparent and that anyone can contribute or comment on the code at any time. As a result open-source actions are subject to much stronger oversight among participants in deciding if they are good or bad – this offers them an advantage against formal organisations in constructing themselves in a consensual and democratic manner, just as it gives an advantage to Linux over Microsoft in writing superior code.

In order for de-centred networks such as UKUncut and the student movement to be as successful as many of us think they can be, dissent entrepreneurs and autonomous groups need to act boldly and innovatively. They must always do so however in a spirit of  collective deliberation, consensus and, most importantly, solidarity.

38 Responses to “Networks can be deliberative, accountable and consensual in decision making”