The proportion of university leavers out of work has nearly doubled since before the recession, an increase from 10.6 per cent to 18.5 per cent. 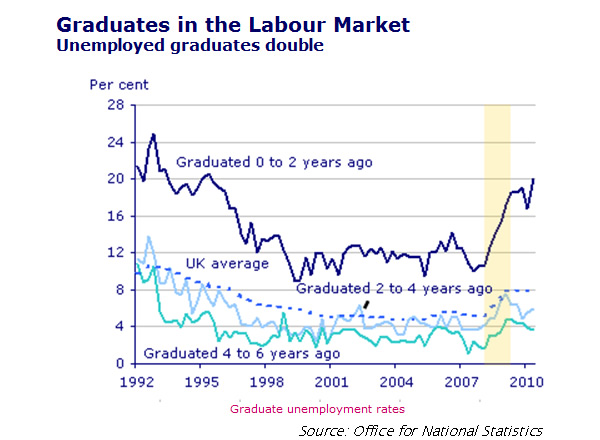 There are a number of interesting aspects to today’s figures for graduate unemployment. The one that gets immediate attention is that the proportion of university leavers out of work has nearly doubled since before the recession, an increase from 10.6 per cent to 18.5 per cent, as illustrated below:

This underlines just how hard young people have been hit by the jobs crisis. We already knew that nearly one million young people are unemployed, and today’s figures underline this fact.

They also underline the perversity of cutting funding for the Young Person’s Guarantee, which provided support to unemployed young people including graduates. The replacement announced yesterday – 8 weeks’ unpaid work experience – won’t help graduates because it is limited to people aged 18-21.

On Saturday, the TUC, in partnership with the National Union of Students (NUS) and University and College Union (UCU), is organising a rally in Manchester to protest against the government’s lack of any sense of urgency about youth unemployment.

Over the past few weeks we have seen university students mobilised by the great fees scandal, followed by school students angered by the abolition of Educational Maintenance Allowances. Perhaps graduates are next on the list of young people the coalition plans to turn their back on.