The basis for the government’s NHS reforms have been challenged by the UK’s leading health policy institute, the Kings Fund, as more doctors’ groups voice their concerns. 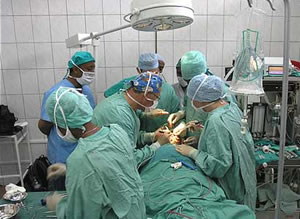 The basis for the government’s NHS reforms have been challenged by the UK’s leading health policy institute, the Kings Fund, as more doctors’ groups voice their concerns.

David Cameron said that patients should not have to settle for “second rate” healthcare, while health secretary Andrew Lansley told the BBC:

“We don’t get the results we should compared with other European countries; if we did we would save thousands of lives.”

Yet in a report from the King’s Fund Institute (President: the Prince of Wales and by reputation scrupulously non-political) has openly questioned the rhetoric that poor NHS clinical outcomes should be better, saying the case for change has been “over-sold”.

The report, by King’s Fund chief economist Professor John Appleby, says figures relating to cancer and heart attack deaths are “not straightforward” to interpret, and “depend where you look”.

The report highlights that:

“These are confirmed by the Office for National Statistics, which last year reported improvements in five year survival rates between 2001-6 and 2003-7 for nearly all cancers. But Eurocare [the cancer study cited by Lansley] is problematic; the latest study includes diagnoses only up to 2002.”

The context here is that UK health spending as a proportion of GDP declined under John Major’s government, and only started to increase from 2000/1.

Interviewed by the BBC, Appleby commented:

“These trends must challenge one of the government’s key justifications for reforming the NHS.”

The message that NHS outcomes have been improving and do not need the shock therapy of full market forces to continue this trend is reinforced by report in The Daily Telegraph on briefings for MPs, prepared for this week’s discussion of the Health Bill.

“GP commissioners are likely to avoid buying expensive, but necessary, operations such as hip replacements and hernia surgery in order to save money… Short-term apparent economies are likely to cost the public purse more in the long term.”

It also said that “standards of patient care may be compromised” unless it is made clear that “the lowest price” should not drive decisions.

The Royal College of Physicians says it is “anxious” that the new system should not lead to the fragmentation of services, which will worsen a nationwide “postcode lottery”. It remains significant as well that the group of doctors who lead on clinical change for the Department of Health have kept a low profile on the reforms, apparently resisting being drawn into Lansley’s attempts at clinical justification for rolling out a market in healthcare.

The respected medical journal The Lancet is blunter still, the latest editorial saying:

“As it stands, the UK Government’s new Bill spells the end of the NHS.”

Drawing comparison with healthcare before the foundation of the NHS in 1948, they comment:

“Now, GPs will return to the market place and will decide what care they can afford to provide for their patients, and who will be the provider. The emphasis will move from clinical need (GPs’ forte) back to cost (not what GPs were trained to evaluate).

“The ethos will become that of the individual providers, and will differ accordingly throughout England, replacing the philosophy of a genuinely national health service.”

So, in the words of Philip Stephens in the FT:

“Mr Cameron has yet to come up with a plausible explanation of the problem he is trying to solve… All the evidence – in terms of clinical outcomes and patient satisfaction – suggests the NHS is travelling in the right direction.”