New analysis by Gavin Kelly shows how individual tax and benefit changes will impact a normal family. They underline the meagreness of the Lib Dem's policy to raise the income tax threshold. 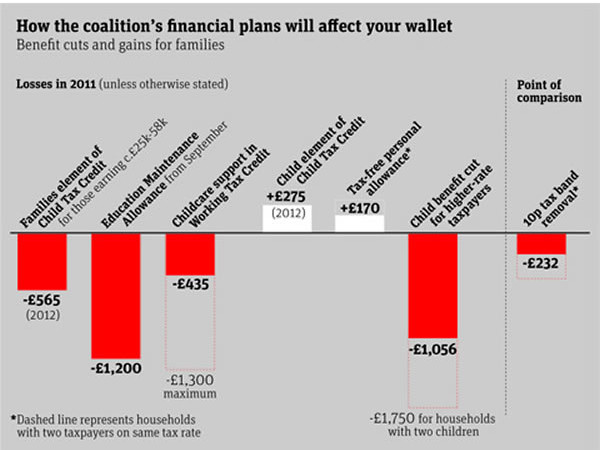 The Staggers have published a great picture today from this week’s New Statesman cover article by Gavin Kelly of the Resolution Foundation. The image – which shows how individual tax and benefit changes due this year will impact a normal family – underlines the meagreness of the Lib Dem’s flagship policy to raise the income tax threshold.

As well as misleading the British public on Britain’s debt position, Nick Clegg was at pains on the Today programme this morning to talk up the Lib Dems’ policy of raising the tax free threshold by £1,000 to £7,475 in the June Budget. Meanwhile, Simon Hughes used a column in this week’s New Statesman to make a similar point.

The problem for Clegg and Hughes, as Gavin Kelly points out, is that the policy is not even enough:

The total tax cut is worth up to £170 for basic rate taxpayers but the VAT rise will, according to the Lib Dems’ famous poster, cost the average family £389 per year – more than double. The policy is also – as Left Foot Forward has previously shown – an expensive and regressive way to target help at the lowest paid.