Will Horwitz reports on the increase in opposition to the government's cuts to legal aid. 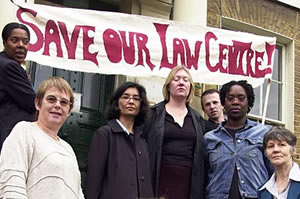 Last week, Left Foot Forward outlined the government’s proposed cuts to legal aid and the hitherto muted opposition; since when, the Justice for All coalition flooded Parliament with so many campaigners that the launch event had to be run twice over, perhaps marking the beginning of more public opposition.

They highlighted the devastating impact these proposals – combined with the expected drastic cuts in funding for advice from local authorities – will have on legal advice services and people in vulnerable situations who rely on them.

The government’s impact assessment shows that charities providing legal aid face an average cut of 92 per cent in their legal aid income, compared to 40% cuts for solicitors and 22% cuts for barristers.

Charities like Citizen’s Advice Bureaux, Law Centres and community charities disproportionately provide support in the areas that are lined up to be cut, or replaced by a new phone line, including 67% of the ‘legal help’ with social welfare issues (debt, housing, benefits and employment advice) which is being removed almost entirely from the scope of legal aid.

Between 80% and 90% of civil legal aid funding is spent on the poorest fifth of the population, and these cuts would disproportionately affect women, ethnic minorities, and people with disabilities. As an example, people appealing a decision on Employment and Support Allowance (ESA) are 65% more likely to succeed if they are represented in court (see Hansard, col 138), yet this representation will no longer be available under legal aid.

The civil legal aid budget is not out of control, it has been going down

It shrunk 24% in real terms between 1997 and 2004 (pdf), and by 15% in the last 10 years (calculated using data in the Green Paper). The growth in legal aid expenditure has been in the criminal budget, but this is left largely untouched by these reforms.

Not all legal aid goes on representation in court

About 23% (calculated using data from the impact assessment into scope changes) of the civil legal aid budget goes on ‘legal help’ rather than representation in court. This specialist advice on issues like benefits, debt, housing, immigration or family law is often carried out by skilled advisors, not lawyers, and is disproportionately provided by charities. It is facing a 54% cut, compared to a 23% cut for legal representation.

There is evidence (from Citizens’ Advice, Leeds City Council, the Law Centres Federation, Youth Access for Information, Advice and Counselling (YIACS), the University of Manchester, Community Links and others) that social welfare advice pays off both financially and socially – saving up to £10 in public expenditure for every £1 spent. There is evidence that debt advice, for example, can have a significant positive impact on people’s ability to get a job or stay in work.

The Ministry of Justice impact assessments acknowledge the reforms might lead to:

“Increased resource costs for other departments… [and] increased transfer payments from other departments… [because] if civil and family issues are not resolved effectively people might continue to rely upon the state, including because failure to resolve one issue may lead to another arising.”

Research in Nottingham (pdf) suggested that 40% of advice workload is a result of failures in external (largely public) agencies, such as Jobcentre Plus. A ‘polluter pays’ system would charge agencies for the extra demand they cause elsewhere in the system, acting both as a source of revenue and an incentive to stop making mistakes.

The £350m of savings proposed in the Green Paper is reached in two ways: firstly by reducing the number of issues for which an individual can get help (for example, all benefits and most debt advice would no longer be covered), and secondly by tightening the financial threshold at which someone is eligible for support.

Combined, these mean half a million fewer people would receive advice and representation funded by legal aid each year. On top of that, the government proposes to make a telephone line the sole point of access for legal aid, only reserving small amounts of face-to-face advice for those cases considered too complex for the phone.

Overall, these changes, particularly the removal from scope of social welfare advice and representation combined with the expected drastic withdrawal of funding for advice from local authorities, would leave people in vulnerable situations with little recourse to support.