A racist video from the BNP candidate in Oldham East and Saddleworth, Derek Adams, shows that the party are still as racist as ever, reports Chris Tarquini. 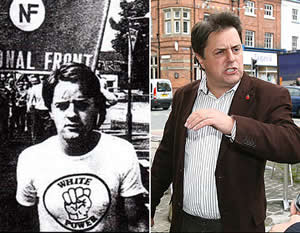 With the Oldham East and Saddleworth by-election looming, much of the focus has been on the fortunes of the Liberal Democrats, who face their first test with the voters since deciding to prop up the Tory-led government. Whilst past results suggest the three largest parties will easily take the vast majority of the votes, the far-right British National Party are among the minor parties contesting the seat.

Following Nick Griffin’s decision not to stand and therefore avoid electoral humiliation in Oldham, the BNP chose their previous candidate, former pub landlord Derek Adams, to stand in his place.

After the BNP failed to gain any seats at the previous general election Adams released a video which presents a false and racist image of how Britain has changed over the previous decades; whilst most sane politicians would want the video to be buried Adams seems to be embracing it even with a fresh candidacy for a parliamentary seat looming.

The video uses selective images of the faces of ethnic minorities (of no determined religion) to illustrate their claims of negative changes in British society, with young white children representing Adams’ strange image of a past, fictional British society, showing that racism is as alive and well in the BNP as it has ever been.

Amongst Adams’ targets seems to be a group of parliamentary candidates, all of whom are ethnic minorities, under the caption ‘when we’re in power we’ll let our Muslim brothers and sisters in’. He further takes aim at David Miliband, where a picture of Mr Miliband is accompanied by the words ‘Coming from immigrant stock I know the importance of letting anyone and everyone come to ‘our’ country’, a reference to the Labour MP’s Jewish and Eastern European ancestry.

Some may argue that starving the BNP of publicity is the best way to prevent them from gaining support, however Nick Griffin’s exposure on Question Time led to a decline in electoral support as they were shown for what they are. Perhaps the most disgusting of all the parts of the video was the using of images of a graveyard full of dead soldiers that Adams tries to co-opt for his own political purposes.

The video is just one of a series of embarrassing stories emerging from the divided BNP in recent months. London BNP assembly member Richard Barnbrook was expelled from the party in September 2010 following a leadership challenge to Griffin; Barnbrook was previously revealed to sleep with a copy of Hitler’s ‘Mein Kampf’ under his bed by his Finnish mistress.

Despite leader Nick Griffin’s claims to have changed the party from its racist past, the video from the man who is currently one of its standard bearers show that nothing could be further from the truth. Every negative image in the video is an ethnic minority, every positive one a white Briton. The party claims to have changed, but the facts don’t support that. The next question must be, what scandal will rock the BNP next?