During a surprise visit to Afghanistan this week, the prime minister announced the UK will double its military unmanned aerial vehicle (UAV) capability by 2013. 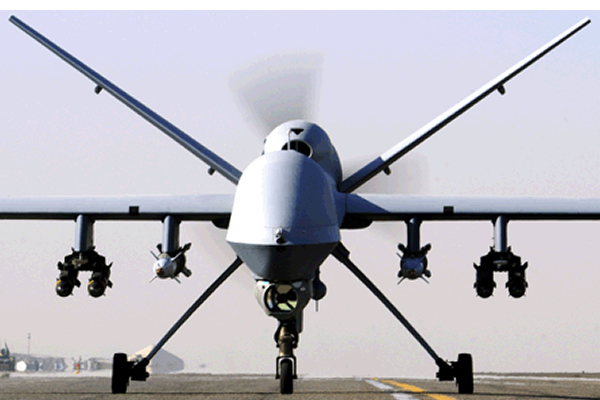 During a surprise visit to Afghanistan this week, the prime minister announced the UK will double its number of Reaper unmanned aerial vehicle (UAVs) by 2013. He described a £135 million plan to increase the number of Reaper UAVs operated from Kandahar airbase to approximately ten. The new vehicles will be complemented by 54 UK Watchkeeper UAVs, being built in Leicester, which will begin to enter service in late 2011.

The new deal, according to Mr Cameron represents:

“…our decision to concentrate on the forces and equipment we are going to need for the future… The Reaper is a classic example of the weaponry that is necessary for today’s war.”

This language, alongside his claims that UK troops may be able to start leaving Afghanistan as early as next year, imply Mr Cameron sees drones as a long-term part of the UK’s defence arrangements in the post-crash, post-Afghanistan strategic environment.

His twin announcements (potential early withdrawal, increase in drone use) mirrored news earlier in the year that, whilst US troops have largely pulled out of Iraq, the number of drone flights over the country has remained constant. Indeed, Col. Robert Sova, who manages UAV capability at the Army’s Training and Doctrine Command, predicts an increase in flight hours:

“What we’re seeing is a significant increase in the use of communications relay and communications extension. The need to cover a geographical area is still the same, but now we have less troops.”

A more tempting analogy is Churchill’s 1921 decision to use the new RAF to put down rebellions in the British Mandate of Mesopotamia (maintaining large troop numbers was not considered fiscally responsible). In fact, Churchill saw early Iraq as an ideal training ground for Britain’s future military. As he put it, the country offered an opportunity to carry out a:

Turkish officials have been lobbying Defence Secretary Robert Gates for Predators, to make up for the decreasing US presence in Iraq. US drones have been providing intelligence, surveillance and reconnaissance in northern Iraq for Turkish raids on PKK fighters over the border. Turkey, it appears, is hooked.

These requests come to light just a month after it transpired the CIA may be using faulty software in its own Predator programme. That was the accusation of software-maker IISi against computer firm Netezza (who have been providing hardware and software to the CIA), with the two reaching an out-of-court settlement last month. After these potentially deadly shenanigans, detailed here, let’s hope the MoD read their contracts for the Reapers (which are upgraded Predators) carefully.

Wednesday’s announcement of more UK drones realise plans to expand the technology in the Strategic Defence and Security Review. It also revisits a century-old dream: pacifying the east, on the cheap, from above.

11 Responses to “Cameron: Drones are the future, in Afghanistan and beyond”