New campaigning models that are de-centred mean 2011 promises to be a year of immense excitement for grassroots politics in our country, writes Aaron Peters. 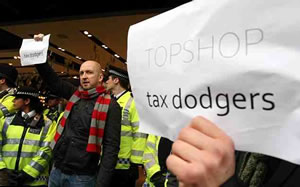 The last several months have witnessed some of the most exciting developments in British grassroots politics for a generation. While in the immediate aftermath of the May general election it appeared, all be it briefly, that a coalition government of the Liberal Democrat and Conservative parties might be able to articulate a coherently centrist ‘Liberal Communitarian’ agenda that might potentially win broad public support for the medium term, the last few months indicate otherwise.

Discontent has mobilised across several groups, including schoolkids, university students, trade unions and, most importantly, passionately concerned members of the British general public from a diversity of backgrounds. The first organised and innovative manifestations of this discontent have been facilitated by networks not organisations.

It has been the student movement, multi-headed in nature (including the occupations movement, the National Campaign against Fees and Cuts, the London Student Assembly and the Education Activist Network) that has mobilised and won political arguments against reforms to higher education and the abolition of the Education Maintenance Allowance – not the NUS.

Likewise it is the UKuncut movement and other networked platforms such as False Economy that are making the arguments in both the old and new media and engaging with actions on the ground whom are making the early running against the cuts more generally and corporate tax evasion in particular rather than the unions, although the latter are beginning to now mobilise and will be a massive and vital voice in the months and years ahead.

It is these networks, such as the student occupation movement and UKuncut that utilise zero-cost social media tools and networks to organise and communicate, that are one of the big political stories of 2010. Along with Wikileaks and Anonymous it is these actors that give credibility to the argument that in 2010 we finally saw the internet and the immense possibilities it brings in terms of undermining all the certainties of the ‘Old Politics’.

The vast tranche of Wikileaks documents gives credence to the belief of many cyber-activists since Richard Stallman that with these tools and systems, ‘information wants to be free’, and that in the words of John Gilmore, ‘the net interprets censorship as damage and routes around it’. Just as state censorship in the age of the internet is massively undermined so to the possibilities for social movements engaging in contention at the grassroots level are exponentially increased.

One important aspect of this new politics is what one might refer to as its ‘open source’ nature, just as the Linux operating system and Wikipedia can be built upon by anyone with the capabilities, skills and requisite passion to do so, these movements are constituted in a similar fashion crowdsourcing the skillsets and social networks of anybody who wishes to participate.

Hitherto NGOs and social movement ‘organisations’ have been exactly that, organisations, with centralised bureaucracies and internal hierarchies – a coterie of activists who ‘produce’ activism and a mass membership who consume it. This paradigm can be extended from the trade unions, to the NUS, and might be seen as an equivalent to the ‘closed source’ approach of Microsoft and the Encyclopedia Britannica where only a small cadre of professionals contribute to the code or add to the content of the encyclopedia.

In the new ’crowdsourced’ paradigm the distinction between producers and consumers of dissent is dissolved – there is no organising or membership structure in place, with instead all individuals being potential ‘participants’ within a movement.

Anyone can contribute, hence we have the rise of what has been termed dissent entrepreneurs with such individuals similtaneously performing the old roles of both producers and consumers of dissent – indeed they are much like those who participate in citizen journalism or use content on Flickr, YouTube, Vimeo or Twitter being what Alvin Toffler called ‘Prosumers’ – at once producing dissent, mobilising and faciliating it – while also participating in actions facilitated by others.

An example of this new paradigm might be a student involved in a university occupation, who would participate in a demo organised by the National Campaign against Fees and Cuts, who would later blog and share via Facebook and Twitter content they have watched on the False Economy website as well as their own photos of the demo in which they have participated, before the next day facilitating and organising a flashmob within the UKuncut network.

It is this prosumption of dissent and ‘entrepreneurialism’ that is vital going forward. While the trade unions will prove massively important organisations, individual trade unionists must also see themselves as capable of participating within this multiplicity of networks in combatting the cuts. This movement needs the unions, but it also needs unionists at the individual, grassroots level engaging with networks like False Economy and being dissent entrepreneurs, perhaps even more so.

This new model that is de-centered and networked and possesses the ability to spread virally may well be the big story of 2011 – a year of immense excitement for grassroots politics in our country.

It may well be the genesis of a period where political contention and dissent in general and the anti-cuts movement in particular will broaden to the point where absolutely everyone from kids to students, to parents and trade unionists, will be able to contribute, when opposition to this government, the cuts and systemic tax evasion is no longer confined to Westminster, political parties, the media and political classes, trade union leaders, lobby groups or NGOS but is available to everyone.

A year where the production of this dissent goes truly open source.