As bloggers, foreign diplomats and freedom of information evangelists revel in what twitter invariably named #cablegate, concern should also be expressed for the long term consequences of the leak by a disillusioned US military officer. 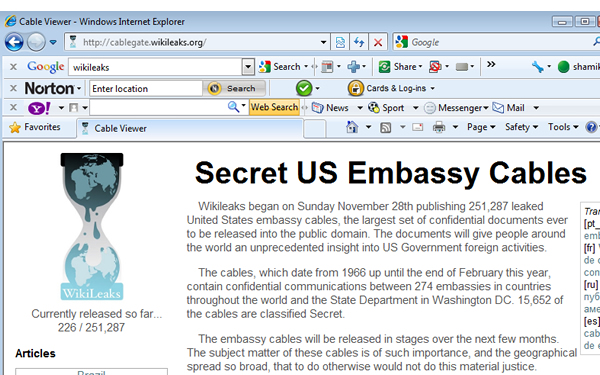 As bloggers, foreign diplomats and freedom of information evangelists revel in what twitter invariably named #cablegate, concern should also be expressed for the long term consequences of the leak by a disillusioned US military officer.

This concern is different from the widespread worries about the damage Wikileaks will do to US diplomacy, military planning, covert operations or even human intelligence assets for the problem lies in the risk of the US government’s reaction to the incident and the danger it that poses to future internal information sharing within the US intelligence community.

The US intelligence community was blamed in the wake of 9/11 for failing to ‘connect the dots’ of terrorist plans and communications with the lack of internal intelligence sharing between the CIA, FBI and NSA in particular being cited by the 9/11 Commission as a core concern in the aftermath of the attacks.

“The need to restructure the intelligence community grows out of six problems that have become apparent before and after 9/11:

“Structural barriers to performing joint intelligence work. National intelligence is still organized around the collection disciplines of the home agencies, not the joint mission.

“The importance of integrated, all-source analysis cannot be overstated. Without it, it is not possible to ‘connect the dots’. No one component holds all the relevant information.”

As a result, the US government changed its systems and regulations on internal information sharing, moving towards a kind of intelligence library as recommended to the Bush Administration by former National Security Advisor Brent Scowcroft.

As The Guardian today reports, the result was the creation of:

“…a programme under which selected dispatches, considered moderately secret but suitable for sharing with other agencies, would be automatically loaded on to secure embassy websites, and linked with the military’s Siprnet internet system…

“More than 3 million US government personnel and soldiers, many extremely junior, are cleared to have potential access to this material, even though the cables contain the identities of foreign informants, often sensitive contacts in dictatorial regimes.”

Whilst few would argue that sharing this much information with this many personnel was wise, the risk is that pressure from Congress and/or the Administration itself will now push the intelligence community too far back in terms of compartmentalising information making the task of ‘connecting the dots’ – particularly in counter-terrorism – that much more difficult.

The Obama Administration would do well to heed the warning of former Bush Administartion Director of Central Intelligence General Michael Hayden who said in response to the earlier Wikileaks dump:

“…senior leadership in the country will have to guard against over-reaction.”

Guarding against that overreaction in the days and weeks ahead will be as difficult as it is necessary.

16 Responses to “Long term, cablegate will harm intel-sharing and US counter-terror efforts”