The Yes to fairer votes site launches this week. In contrast to the dull oppressive shades of the No campaign’s site, it is clear, bright and colourful, and focuses on the grassroots nature of the campaign with ways in which people can get involved. There is now a network of determined activists across the country that has grown steadily since the extraordinary outpouring of energy during the purple “fair votes” protests back in May. 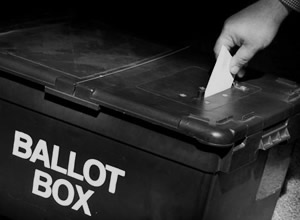 With exactly six months to go until the proposed referendum on AV, Guy Aitchison, a blogger and political activist who is a contributing editor at openDemocracy.net and a volunteer with Take Back Parliament, looks at how the opposing campaigns are shaping up

The early announcement that Matthew Elliott, head of the radical right-wing group The TaxPayers’ Alliance, would be heading the “No” campaign, has led most mainstream commentators to the lazy assumption that the opponents of reform are far ahead in terms of strategy and organisation. Elliott, of course, enjoys a fearsome reputation for his success in getting the low-tax, anti-state message favoured by the group’s wealthy backers into the media, and the TPA can justifiably boast of their influence over Tory policy.

But this referendum isn’t going to be won or lost in the column inches of the Daily Mail, much less the dining rooms of Notting Hill. Come May 5th, it’ll be the people who decide whether they want change – and there are many hundreds who are already mobilising to achieve it.

This bonfire weekend, the contrast between the two campaigns couldn’t be starker. The No campaign has drawn on the resources of its wealthy backers – people who have most to gain from the status quo – to fund a new video and a series of online ads designed to sow anger and confusion.

The video asks what are the “burning issues” for you this bonfire weekend, before pointing out that “cuts”, “jobs”, “schools” and “hospitals” are being ignored for a referendum on the Alternative Vote. It is striking how there is zero discussion of the issues raised by electoral reform in the video. Instead, the focus is solely on the alleged cost of the referendum.

This, then, is how the No campaign will be playing it. With easy populist slogans, designed to spread confusion and exploit popular anger at the cuts. The irony, of course, is that the message comes from a mixture of Tories and TPA luminaries, people who have done more than anyone else to further the government’s cuts agenda. And make no mistake, they take the very opposite view of the cuts to the one implied by this video. They know that they have every reason to fear democracy.

As a researcher at the fellow right-wing think tank, the Institute of Economic Affairs (IEA), put it in a moment of remarkable candour, AV is “not a good way to elect Members of Parliament who will support radical free-market economic reforms”, since this system requires politicians to build a broad base of support and attract second and third preferences and this is likely to disadvantage free marketeers whose views enjoy limited popularity.

Whilst the No campaign remains fixated by pushing its negative agenda into the Westminster media, the Yes campaign has been quietly putting in place an experienced team, with a mixture of Liberal Democrats, Labour, and non-aligned figures in senior positions, including John Sharkey, formerly of Saatchi and Saatchi, Paul Sinclair, a former advisor to Gordon Brown, and Katie Ghose, the new director of the Electoral Reform Society.

The Yes to fairer votes site launches this week. In contrast to the dull oppressive shades of the No campaign’s site, it is clear, bright and colourful, and focuses on the grassroots nature of the campaign with ways in which people can get involved. There is now a network of determined activists across the country that has grown steadily since the extraordinary outpouring of energy during the purple “fair votes” protests back in May.

They are ready to take the fight for reform to the country, turning every town, street and doorstep purple. This weekend more than 50 fairer votes launch events are taking place in communities from Watford, to Manchester, to Aberdeen, all organised by local Yes campaign volunteers. You can find one in your area using the Take Back Parliament site, and perhaps pop down and enjoy some firework as well.

It’s the difference between an authentic grassroots mobilisation and pseudo-radical astro-turfing designed to preserve the status quo. With six months to go, the different approaches of the two campaigns are very much on display.

22 Responses to “Six months from the AV referendum, how are the campaigns shaping up?”