Back in June, Left Foot Forward wrote about a project being run by a collective of community organisers, environmentalists, campaigners, Labour and Lib Dem activists, bloggers, writers, and development workers. A wider group convened again this week to hear the interim findings of the research. 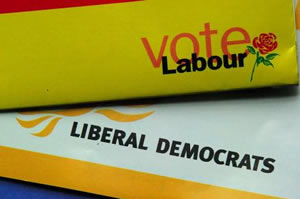 Back in June, Left Foot Forward wrote about a project being run by a collective of community organisers, environmentalists, campaigners, Labour and Lib Dem activists, bloggers, writers, and development workers. A wider group convened again this week to hear the interim findings of the research.

In an article in today’s Guardian about the rebuilding of grassroots alliances between Labour and Lib Dem activists, Patrick Wintour and Allegra Stratton write:

[The Latimer Project] has sought to learn lessons from two recent experiences of a party losing power only to re-enter after a significant period of renewal – the experience of the Democrats in the States and the Tories here in the UK, saying: “Both show that they wasted four years, and that there were four stages.”

• How can British progressives learn lessons from recent political renewals in the US and UK?

• What is the funding, impact, and organisation of the British conservative ecosystem?

• How does the progressive left do by comparison?

• What more is needed?

As discussed on Left Foot Forward in June, “From 2004 onwards, a process of institution building took place across the American left to reclaim from the right an advantage in policy formation, political communication, movement development, and voter engagement lost during the ascendancy of US conservatives over three decades.” Since starting on the project in June, research lead Daniel Elton has discovered a similar rebuilding process among the British right. An interesting observation is that, in both case, four years were wasted before the renewal began.

Wintour and Stratton discuss the “four stages” of renewal. On the British right this meant (i) new think tanks like Policy Exchange and Iain Duncan Smith’s Centre for Social Justice devising policies on issues like health, education, and social justice that had been seen as left-wing issues, (ii) new media-facing campaign groups – like TaxPayers’ Alliance and MigrationWatch – moving the centre ground on issues like low taxes and immigration, (iii) new activist groups like the ConservativeHome blog and the Young Britons Foundation engaging activists in a time of triangulation and training them up, and (iv) the coming together of these groups’ activities at election time with the express aim of getting Conservative party MPs elected. This is not to suggest that any conspiracy took place – the growth was far more organic than that – but each grouping new its role and stuck ruthlessly to it.

Understanding what the Democrats did after 2004 and Conservatives did after 2001 provides clear lessons for the progressive left. Most important is identifying the political purpose of a new left-wing government and the progressive policies that deal with public concerns over immigration, welfare, and crime. Good ideas are not enough, however. The left also needs new organisations aimed at training community organisers and campaign groups with the express aim of raising the profile of left-wing issues like tax avoidance, equality, public investment and crony capitalism. Moreover, this regeneration will require a new collection of progressives to join those who are already contributing their time, energy, and, in some cases, financial support.

Doing this also means being realistic about the likely election outcome in 2015. Although Labour is still the progressive party best-placed to win an overall majority, with such uncertainty on both the electoral system and the number of constituencies, it is very hard to project what different poll leads will mean. The possibility of another hung parliament and a coalition led by a Labour Prime Minister has to be planned for. While MPs in Parliament will rightly slug it out over public service cuts, tuition fees, and immigration reform, the progressive movement must ensure that progressive activists from all parties of the left are included.

19 Responses to “Rebuilding the progressive left”