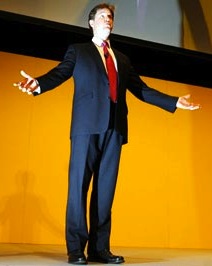 Sunder Katwala is General Secretary of the Fabian Society

Deputy Prime Minister Nick Clegg used his Hugo Young lecture at The Guardian to unfurl a banner for the “new progressives”.

Down with focusing on “old progressive” goals of reducing income inequality and relative poverty, the “old” thinking of the statist left. Up with social mobility, the great “new progressive” cause of the modern meritocrat.

Here Clegg’s lecture followed closely in the footsteps of David Cameron’s Hugo Young lecture a year ago, in which Cameron argued that state action was now increasing poverty and inequality, so reducing the role of the state would enable the “big society” to reduce inequality.

Yet Cameron’s speech was criticised for a major hole in its analysis of inequality. “To make a speech about inequality and poverty and then to chart the course of 20th-century British history but miss out the Thatcher years was dishonest”, wrote Richard Reeves, now Downing Street to Nick Clegg (though then head of Demos) in a punchy critique of the Cameron lecture for Prospect magazine.

By the same token, a deputy Prime Minister who wants to make restoring social mobility in Britain his great cause in government is surely going to need to have, and to articulate, a clear analysis of why social mobility fell. But Nick Clegg’s speech didn’t seem to address this, so I thought I would ask him to unpick the social mobility mystery. The gist of my question was this:

You share a lot of themes with David Cameron in his own Hugo Young lecture last year. But several people noticed that David Cameron didn’t say anything about why there was such a sharp slump in social mobility in the 1980s. So I wonder if you could offer us your analysis of why social mobility fell so sharply then?

So did Nick Clegg rise to that challenge better than David Cameron? Here’s how he responded. “The evidence on social mobility is extraordinarily difficult to unpick”, he said. Some of the data is from the 1970s. It was not always clear what was going on. He extended that point to note to that “the comparative data is very complex”.

But he went on to make one substantive point that went beyond the general point that the international evidence was complicated.

“One thing is that a society where the gap between top and bottom is narrower, in a sense, it is easier to measure social mobility, because there is less distance to travel“, he said.

He then returned to the UK, and said he thought that a particularly significant and “distinctive” feature in the UK was “the extent of social segregation in the education system”. He talked generally about how he felt that this was important, saying he felt this was reflected in the PISA studies and the research of the Sutton Trust, and how he was confident that the Coalition was seeking to do something about this.

That was about all.

This answer didn’t offer much progress.

First, Clegg’s answer – even when prompted – followed Cameron in failing to mention the 1980s at all. The point about methodology is a good reason for being cautious in making preliminary findings about the last decade – it is too soon to tell definitively what has happened to intergenerational mobility, that is much less plausible in terms of the 1980s.

But we didn’t get any explanation from him about the causes of the fall in social mobility which he is so keen to reverse, nor what he is trying to do to ensure that a government which believes it is necessary to reduce the size of the state (because of its deficit reduction strategy) can avoid repeating the negative social consequences of state retrenchment in the 1980s.

There is a political explanation as to why David Cameron cannot mention the 1980s. The Tory leader has never explicitly criticised Margaret Thatcher in public. That demarcates the limits of Tory modernisation. It is more of a mystery as to why Clegg would refuse to give an account of the 1980s.

Secondly, Clegg gave no substantive account of the drivers of high mobility and low mobility, for example between Sweden and America either.

Clegg’s reference to societies with a smaller gap between top and bottom was rather opaque, and odd.

To follow the evidence to that point would surely wreck his overall argument for “new” progressives not being particularly bothered by “old” income inequality, if it turned out to be an important causal driver of the high social mobility he wants.

But perhaps Clegg will need to reconsider this anyway. Despite the lecture’s core inequality-sceptic argument, Clegg’s government and party are in principle committed to reducing child poverty (a relative inequality measure).

So that ought to offer him a route back to the more sensible common sense argument for those interested in equal opportunities: that narrowing income inequality (and reducing child poverty in particular) is one important part of narrowing intergenerational inequalities in life chances, though income is not the only thing that matters to reducing the transmission of advantage and disadvantage across generations.

There were more unanswered questions last night. Timothy Garton-Ash asked, since Clegg had spoken about “new” progressives throughout the speech, whether he could give a definition of what he meant by the word.

Clegg’s lengthy answer didn’t seem to offer a clear definition. There were, he said, essentially three groups. Conservatives mostly wanted to conserve the status quo, “except Margaret Thatcher”, who didn’t, he explained. Then there were collectivists – the socialist tradition – which believed in using the state. This, Clegg explained, had achieved great things in liberating people through the state in the 20th century, but it was no use trying to do use this approach now. The third group were his “new progressives”, who wanted change, but through citizens, not the state.

Nick Clegg wasn’t asked one obvious question – did David Cameron fit his definition of a “new progressive” – though the definition seemed designed to bring the Conservative leader in.

Yet, on the evidence of the two Hugo Young lectures, both of the Coalition’s self-styled “new progressives” seem caught in a contradiction about whether or how they think inequality matters or not.

34 Responses to “Nick Clegg and the social mobility mystery”