Twenty four months into its economic crisis and Ireland is finally beginning to address the fundamental issues that caused its national disaster, starting with the unique Irish mentality and its parochial political system. 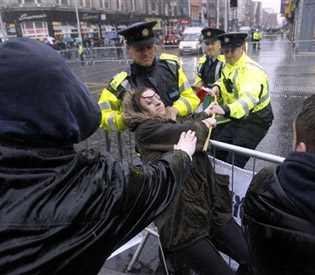 Irishman Patrick Bury served in The Royal Irish Regiment in Sangin, Afghanistan; a memoir of his experiences ‘Callsign Hades’, described as “a scintillating masterpiece, the first great book of the Afghan war” is out now

Twenty four months into its economic crisis and Ireland is finally beginning to address the fundamental issues that caused its national disaster, starting with the unique Irish mentality and its parochial political system.

Anyone listening over the last few days to the continuing (black) comedy of Irish political wrangling, as the government  titters on the brink and a general election is imminent, would be struck by the lack of real alternatives offered by the other Irish political parties.

Most of the politicians are now utterly discredited, inept, yet still fighting for their political lives. I have never seen the depth and scale of the outrage felt by Irish people toward their so called political representatives in almost 30 years of living here.

The widespread view is that nearly all the old politicians are tainted, that it is time for a real change in the Irish political landscape. But, despairingly, none of the political parties have grasped this. Ireland lacks credible political leadership.

Politically and socially, what Ireland really needs now is a new start: A new generation of younger leaders who will put the national interest above party politics and even their constituents’. Radical, progressive, constitutional reform of Ireland’s political system to help confine parochialism to the past. A pooling of the nation’s talent to empower policy making. The use of referenda to put the issues quickly and effectively to the people and let them decide.

Any working policy proposal, from whatever political background, should be considered if it will genuinely benefit the country. Well thought out, pragmatic, radical political and social change should be an option. Ireland now has a great opportunity to question whose interests the nation should serve and what kind of society it wants to be for the next century.

Radical change. Just like in 1916. Do not forget that the Irish nation asserted its independence in a spirit of social equality. The very divisiveness Ireland has experienced in the last two years has shades of that which killed one of its greatest, socially egalitarian, national statesmen in 1922, Michael Collins.

Over the next 40 years the world will face major changes and challenges. Population increases, pressures on natural resources and climate change will, sooner or later, force a rethink of the growth based model of social organisation. Ireland’s current crisis and relative smallness means this is as a real opportunity to re-position Irish society and its economy for the changes ahead.

Economically, no idea should be off the table: Is the Euro best for Ireland? What about default? Ireland needs invigorated debate on the issue. What about Anglo Irish bank? Can the citizens get out of bailing it out? It is definitely in their interests to. What about pursuing under law the few who got them into this mess, why is it not happening?

Somewhere within, all of us Irish know we will have to swallow lower incomes, lower standards of living and higher taxes, but Scandinavian countries provide decent examples of socially fair taxing systems that produce excellent welfare regimes. Why not try something new? What about using some of the €12 billion pension fund to stop the outflow of emigration and keep Irish youth in Ireland?

Other countries provide other examples of nation building. Germany has compulsory national service for nine months for 18 year olds. Civilian service in the health, fire brigade, community police and the military, coupled with the option of voluntary service in the Red Cross and other charities, could foster a higher sense of nationhood amongst us. One of Ireland’s best gifts to their young is (relatively) free education, how about they give something back?

No politician has publicly addressed the flaws in the Irish benefit system, for fear of losing votes in a constituent sensitive national political system. But it needs fundamental change. It’s costing Ireland about €21 billion a year. In the UK a single male gets £54 a week plus rent allowance. In Ireland he gets €204 plus rent. People are flying back to Dublin to collect their dole. This is unsustainable. Australia pays a means tested maximum of €128 plus rent and has an egalitarian Activity Agreement tied to this payment. This is more sustainable. Why not try it in Ireland?

Ireland is a relatively young nation, forged in the fires of social equality. It now needs to grow up. We need a new breed of political representative, enthused, aware and ready to act in the national interest. There are many great talents, minds, ideas and hard workers on this island; Spirit of Ireland is but one that could revitalise Irish society and economy.

Somewhere along the way Ireland lost the dream of those who founded the nation to the wink and nudge of parochial, self interest politics. A finance minister (and former Taoiseach) who doesn’t have a bank account must become the unacceptable legacy of a nation finding itself.

Now Ireland needs invigorated, strong national leadership to govern in the national interest, honesty, transparency, and a sense of community.

The first step is ideas; ‘Enough is Enough’ by Irish Times Journalist Fintan O’Toole is full of them, as is a new centrist progressive movement – Nua – New Era, New Eire, on Facebook.

7 Responses to “Ireland on the brink: Time for the Second Republic?”