David Cameron's speech to East London entrepreneurs about the government's long-term commitment to transform London’s East End into "a world-leading technology city to rival Silicon Valley" is laudable in its intent. The prime minister said a number of companies including Vodafone, Google, Facebook, Intel and McKinsey & Co were interested in investing in the region over the longer term. 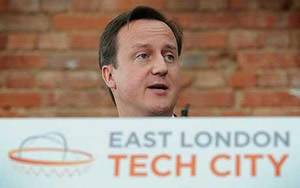 David Cameron’s speech to East London entrepreneurs about the government’s long-term commitment to transform London’s East End into “a world-leading technology city to rival Silicon Valley” is laudable in its intent. The prime minister said a number of companies including Vodafone, Google, Facebook, Intel and McKinsey & Co were interested in investing in the region over the longer term.

A mix of changing web technologies based on open source software, ever more powerful computers and home broadband services becoming the norm in consumer’s homes set the scene for an explosion in online creativity around the world. The cost of setting up a start-up had become cheaper so the UK’s poor start-up funding environment didn’t have as negative an effect as it had in previous decades.

Over time, a cluster of start-ups bootstrapped themselves together to form an eco-system that was labeled Silicon Roundabout since the scene centred around the Old Street roundabout. Some companies such as Moo.com and Last.fm received international exposure, the UK’s tech reputation was helped further by the pioneering work done online by the BBC, in particular its Backstage programme of public/private collaboration.

But all of this pales in comparison to the size of the start-up scene in San Francisco and south on route 101 into Silicon Valley. Silicon Valley has a number of factors that give it a head-start over other areas of the world:

• It’s ok to fail, the US bankruptcy laws are much more lenient than the UK, encouraging entrepreneurs to learn the lessons of their failures and get back in the saddle;

• Silicon Valley historically has a better funding environment. The first Silicon Valley companies benefited from funding by small regional banks that historically worked with the agriculture sector in the area. Over time it developed a famous venture capital industry based around Sandhill Road in Menlo Park, California and now has a thriving angel investor scene which funds businesses with less requirements for capital. Just this week, Netscape founder Marc Andreessen raised $650 million to invest in web start-ups;

• Silicon Valley has been closely linked to premier research university Stanford which was instrumental in the formation of major companies throughout its history from Hewlett-Packard, to Yahoo! and Google. The university provides a steady stream of engineers and entrepreneurs to the bay area;

• The liberal nature of San Francisco has made it popular with the creative classes and the neighbourhoods of the Bay Area have good quality housing, good policing and a high standard public schools were employees are happy to live;

• Silicon Valley is highly connected to the rest of the world, having San Francisco as an international airport and more importantly, an excellent broadband infrastructure

These are all factors that author and urban studies expert Richard Florida deemed critical for building the kind of technology city Mr Cameron envisages. So, how does the prime minister’s vision match with the criteria for creating a new Silicon Valley?

Whilst the UK bankruptcy laws changed under the previous Labour administration more could be done to create an entrepreneur friendly environment:

• Mr Cameron mentioned that UKTI would be setting up a presence in East London, but there was no concrete measures to either reinvigorate the UK start-up funding sector or attract foreign start-up financiers;

• Whilst London has a number of research universities including UCL and the University of East London’s SMARTLab Mr Cameron did not discuss the role that these institutions could play as catalysts. Secondly the government’s proposed spending cuts on education will adversely affect their ability to innovate;

• Whilst the UK leads the US in areas such as gay marriage, the current libel laws and Digital Economy Bill affect freedom of speech and innovation across large swathes of the digital arena;

• As for broadband, whilst it is widely recognised that internet connectivity is a key economic driver, Left Foot Forward has previously highlighted how unambitious plans for Digital Britain are holding the country back.

Mr Cameron’s sentiment and aspiration to make east London the centre of a digital power house is to be welcomed, but it needs to address the issues outlined above before it is likely to become a reality.

16 Responses to “Cameron’s ‘tech city’ vision is laudable, but more needs to be done”